This is more like it... let's hope it is correct, or even possible, given the parlous run down of the South African military, once a potent force, in the decades since 1994.

On Wednesday night Defence Minister Nosiviwe Mapisa-Nqakula announced that the military will be providing a surge of troops, bringing the total deployment in trouble spots up to 25,000. Mapisa-Nqakula stressed that the President has assured the Department of Defence not to worry about the money, although even just finding the personnel for such a large deployment will be a monumental task. Cooks, clerks, technicians, perhaps... If the number is even close to 25,000, the SA National Defence Force may well be providing the security net that KZN and Gauteng has lacked until now.

Best just to stand back and let the blicks get on with it.

Africa is a true shithole. For a period, due the efforts of a bunch of civilised Europeans, it had some decent patches, but those days are mainly over.

What Africa really needs is a huge fence built around it.

To keep the fcukers in.
Top

When all else fails, read the instructions.
Top


The high elevation, unmarked airstrip sits on a narrow ridge south of the confluence of the Pelaneng and Malibamatso rivers, with rising terrain to the west and a 400+ ft drop into the river valley off the east end. Another higher ridge lies 2,500 feet (762 m) off the east end, requiring an angling final to runway 29. Landing east is less obstructed, but the downhill slope, short runway, and dropoff make it inadvisable.

Latest aerial imaging shows an embanked roadway has been cut across the runway, rendering the runway unusable.

Only in Effrika would people be stupid enough to ruin a perfectly useable runway in an area with so few similar facilities.

Full text relevant to those wonderful photos in the link ricardian posted.


I was working with Binnie & Partners on the Lesotho Highlands Water Project and was instrumental in the making of the airstrip. Read on:

But the airstrip had still to be built. And here a pair of Land-Rovers did what few have ever done: grade a runway.

Whilst it was possible to drive two bulldozers – for the airstrip, a Caterpillar D6 and a D7 – over the steep passes to Pelaneng to do the heavy work, bringing in either a conventional grader or a sheep’s foot roller (the irregular pattern type used to compact soft ground by imitating the way sheep compress soil with their pointed toes) was out of the question.

After saying, half-jokingly, “Why not use sheep’s feet?” to a table of AMICEs, I found myself rounding up close to a hundred cattle, oxen, horses, ponies, donkeys, goats – and sheep – and having them walk up and down the bulldozed headland for the best part of two days, until the ground had been compacted evenly over the whole length and width of the 2,160 foot long runway area.

Next came the question of how to smooth out the myriad of pockmarks left by the scores of tramping animals. My first idea – of using sixteen oxen hooked to a lorry’s flat load bed that, for reasons unknown, had been left on the headland – came to nought; they were just not used to working in unison as a single full team. They usually worked in pairs – pulling a cart, or a plough, or threshing corn by walking over it, round and round in circles – and that was all.

I looked at the faithful sons of Solihull. We attached one Land-Rover by chains to the lorry bed – with its upper smooth side now facing the ground – but at an angle like a grader blade, and started off. The single station wagon was straining a bit at the amount of drag, so we hooked the second one on in tandem.

It worked like a charm. The two vehicles went up and down until all the bumps and roughness were gone.

Another job for the Land-Rovers was removing great lumps of bedrock too massive to be dug up by the bulldozers. Left where they were, they would have been a potential hazard to aircraft. We dowsed the bedrock with petrol or diesel and set it alight. With the rock well heated, we chilled it with cold water. Chunks broke off, and were loaded onto the lorry load bed to be driven away. One big boulder did not break apart and needed towing or rolling away. As with the improvised grader, one Land-Rover was not enough, so, with two chained again in tandem, the task was completed – leaving Pelaneng Airport (IATA code PEL) at 7,200 feet altitude ready for its first arrival. George Hallowes – the engineer I worked with for most of my time with Binnie’s – flew in on the first plane. Shortly afterwards, on 12th June 1971, I went in and out on a Cessna 210. 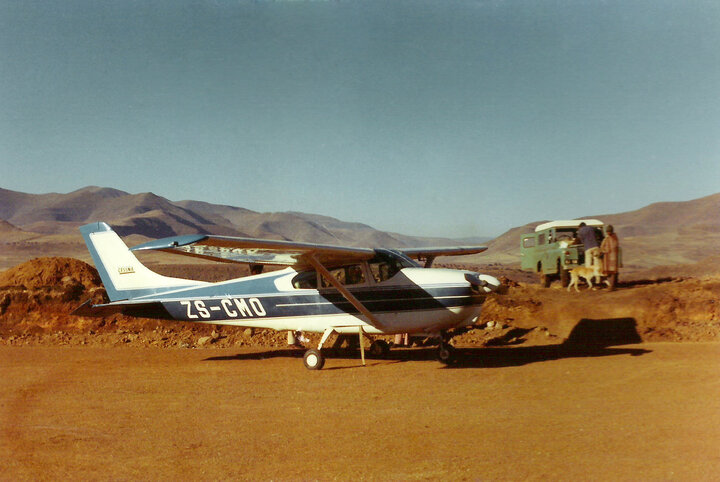 
There’s been at least one objection to the Reserve Force regiments/units name changes. It was made by the City of Cape Town and has no bearing on either the apartheid or colonial part of the part-time units in its municipal boundaries.

Mayor Dan Plato pointed out in a letter to then SA Army Chief, Lieutenant General Lindile Yam, soon after the new names were announced in October 2019 retaining “Cape Town” and “Cape” in Reserve Force regiment names is necessary to ensure the brands continue to exist.

The Mother City’s first citizen points out public communication has it all stakeholders were consulted adding, to the contrary, “we are not aware of any approach made to the City of Cape Town to comment on proposed name changes”.

“The city is an interested stakeholder because there are units within its boundaries whose staffing is drawn from citizens of the city. Further the city has granted Freedom of Entry to a number of units. We have a responsibility to ensure the Cape Town brand continues to be promoted.

“We are concerned the name changes would result in the loss of the words ‘Cape Town’ from all units while other cities and town continue to hold the privilege of units which include their names.

There was, at the time of publication, no indication Plato’s letter was answered.

All these idiots in governement are capable of doing is making useless name changes and rewriting history. For the rest, on the basis of the lack of good government, the country can go to the dogs.
Depressed, feeling a slump, then remember Lift = Coefficient of Lift x 1/2 x ρ x V-squared X S!
Top

I know that you’re a generous bunch on here, so dig deep to help out the embattled Mr Zuma

What is it with locals here? They are afraid of practically everything that moves. We have just had a monitor lizard in the garden. The housekeeper legged it and the gardener would not go anywhere near it to disconnect a hosepipe which I did. Even harmless snakes they make a fuss about. I once picked a chameleon off the road by the airport to save it from the traffic. A lady walking by nearly had a fit about me handling it. Yet, they will go swimming in rivers with crocs and hippos in there.
'Yes, Madam, I am drunk, but in the morning I shall be sober and you will still be ugly.' Sir Winston Churchill.
Top
Post Reply
70 posts