I know that Malaysian Airlines have spare A-380's but what would Air Zim use them for?

Do Malaysia want rid of any (more) B-777's?
Wine improves with age
I improve with wine

Repatriating a few million Zimbos who were driven out of their country by the tyranny of Mugape and his black bitch?

Other than that, I can't see much use for them but these savages have delusions of grandeur.
"Religion is the advertising campaign for something that doesn't exist."
The late Clive James
Top

They have already broken it.

A Boeing aircraft belonging to Zimbabwe's new airline has been flown back to Malaysia for a service barely a month after it landed in Harare, a newspaper confirmed on Wednesday.

The Boeing 777, which was said to have been registered as Z-RGM in honour of former president Robert Mugabe's initials, will undergo routine maintenance in Malaysia, said the private Daily News.


Citing "well-placed sources", the paper said the plane, which has not yet done a single commercial flight, was flown back on Monday "for A checks and other maintenance works".

The plane arrived amid much fanfare in April, freshly painted with the Zimbabwe colours but branded under the name Zimbabwe Airways, rather than Air Zimbabwe, which is the name of Zimbabwe's struggling national airline.

There is speculation the Mugabe family may have an interest in Zimbabwe Airways, especially as Mugabe’s son-in-law Simba Chikore helped to pilot the plane across from Malaysia and his daughter Bona was at the airport to meet it.


President Emmerson Mnangagwa’s government denies the Mugabes have an interest in the new company though. Zimbabwe is reportedly set to get at least another two Boeing 777s, all bought second hand from Malaysia Airlines.

Experts say though that the Boeing 777 is in impractical plane for Zimbabwe, which struggles to fill its smaller Boeing aircraft on short local and regional routes. Zimbabwe also has no pilots qualified to fly the 777 and has to hire expensive expatriates.

Air Zimbabwe is currently struggling beneath a debt of more than $300 million, blamed on years of mismanagement.
"Religion is the advertising campaign for something that doesn't exist."
The late Clive James
Top

Any chance that the cheque bounced and Malayasian Airlines have taken it back?
Wine improves with age
I improve with wine

The administrators of national airline Air Zimbabwe have invited bids for the loss-making carrier which is reported to have debts of over USD$300 million.
The state-owned airline went into administration in October as a precursor to being sold off by the government.
Administrators Grant Thornton advertised the invitation to tender in local newspapers, with registration of interest closing on November 23rd.
The airline was founded in 1967 and is wholly owned by the Government of Zimbabwe. The airline has a total of 232 employees based at its Harare Airport hub.
The airline’s website is currently taking bookings for just four routes, two domestic and one each to South Africa and Tanzania.

Applications to buy and run the airline are flooding in. 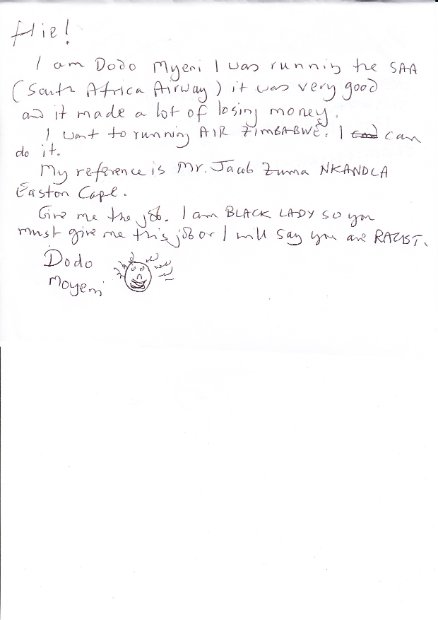 Whoever wrote that isn't very knowledgeable about SA geography.

Nkandla is in KZN!

That's why she made such a stuff-up of running SAA!
"Religion is the advertising campaign for something that doesn't exist."
The late Clive James
Top

Kuala Lumpur - State-owned Zimbabwe Airways, has lost one of the four Boeing 777-200ER aircraft expected because of the payment delay.

The wide-body registered 9M-MRL, had already been painted with the livery of Zimbabwe Airways. But it flew from Kuala Lumpur to Kansas City instead of Harare on November 16 for a new customer.

The “Z” and “W” letters on the livery were removed to hide the name of the company. The new owner of the device is the U.S carrier Jet Midwest, according to rumors.

The initial plan was to acquire four Boeing 777-200ER that were removed from the fleet of Malaysia Airlines. But the airline has managed so far to pay for two aircraft. Now there are only three Boeing 777-200ER parked at Kuala Lumpur waiting to be delivered to Zimbabwe Airways. Two of them are already painted with the colors of the African carrier.

Malaysia Airlines lost two of its B777s in 2014, one shot down by a missile while flying over Ukraine and another disappeared from the radars and lost in the Pacific Ocean because of an unknown reason.

In March 2016, Malaysian Airlines decided to retire all seven Boeing 777s in the fleet because of the bad luck attributed to the aircraft type.

Launched in 2016, the establishment of Zimbabwe Airways has transformed into a scandal. The government claimed that the airline was a private company but admitted at the end that it was state-owned.

Zimbabwe Airways is expected to take over routes long abandoned by Air Zimbabwe, such as Harare-London and Harare-Beijing.
"Religion is the advertising campaign for something that doesn't exist."
The late Clive James
Top
Post Reply
8 posts • Page 1 of 1