This is a kind of RN Wessex related story but is really about a S-58T and UP will remember this incident I expect. In '67 I was part of the Trials Unit at Culdrose that was flying the Wessex HAS3 before it went into Squadron service. One of the aims was to burn as many hours as we could on a few airframes and this was done by either spending many hours on one particular airframe sitting at MAUW in the hover in dispersal, on antisubmarine flight profiles or else on cross country flights. I persuaded the CO that I should take a Mk3 back to my old school in Bournemouth - some 4 and a bit years after I left - and do a recruiting drive.

I had a great day out and as a result one of the students signed up with the RN as a potential helicopter pilot. After his service time flying the Wessex he joined Bristow and flew the S-58T. In 1976 he was on very short finals to the Forties Charlie oil platform when the whole tail rotor assembly detached from the helicopter. He crashed on the helideck but the aircraft bounced and then fell 140ft onto the deck of a crane barge. One passenger was killed, 8 had serious injuries as did the pilot. He had very bad head injuries and I believe he never flew again. I knew the pilot as he and I had both been members of the same Air Training Corps Squadron - he had joined a few months before I left for the RN. Daft, I know, but I've always felt a pang of guilt that I heavily influenced his decision to fly helicopters.

Accident Report - G-BCRU -21 April 1976
The helicopter pilots' mantra: If it hasn't gone wrong then it's just about to...
https://www.glenbervie-weather.org
Top

C16, also helicopter related in relation to your guilt. One of my staff was clearly commissionable. Her husband was a Sgt. Their plan was for her to go for a commission after he retired. I persuaded her that his rank was no bar and not to delay. She was commisioned in due course detached to Iraq and killed when the helicopter she was in was shot down. Like you I experience guilt that I put her in harms way.
Top

A very good article on this chap, this week...


“As La Rochefoucauld once observed, Mr Bond, humility is the worst form of conceit. I have the winning hand,”
Top

Good biographical synopsis
“As La Rochefoucauld once observed, Mr Bond, humility is the worst form of conceit. I have the winning hand,”
Top

I am apt to wonder why Eugene Esmonde and his men were so badly mauled when attacking the Scharnhorst, Gneisenau, and the the heavy cruiser Prinz Eugen, whereas the earlier attack against the Bismarck had yielded, relatively, fewer casualties. I remember reading, in the case of the Bismarck, that the Stringbags came in so low that the majority of the guns on board could not lower their elevation sufficiently to track the aircraft and the gun sights were calibrated for far faster aircraft. In the attack in the channel, had the Germans changed their sight and gun settings, or did the combined fire power of three capital ships prove so deadly, or did the brave airmen use different tactics that might have put them at an even greater disadvantage?

One thing that is for sure these airmen were brave to the point of madness... they didn't stand a chance from the outset!
“As La Rochefoucauld once observed, Mr Bond, humility is the worst form of conceit. I have the winning hand,”
Top

I think that the fire from three directions might have helped as well as from the swarm of smaller escorts. Bismarck was on her own. The AA armament from the three big ships was probably not far short of three times Bismark's AA firepower. The Germans also had fighter escorts but without reading it up again I'm not sure what part they played in the engagement. It wasn't far short of a suicide mission.

https://en.wikipedia.org/wiki/Channel_Dash
Don't worry about avoiding temptation. As you grow older, it will avoid you. - Sir Winston Churchill
Top

A typical Swordfish tale usually notes that much of the stuff happens in front of them because the gunners can't believe they're flying that slowly.
Top

I see that Steve Bond has another book out. His stuff is always well worth reading...


The RAF's continuing role in the projection of air power in the defence of the United Kingdom and its overseas interests since the end of the Second World War is well known. However, the same cannot always be said about the Royal Navy's Fleet Air Arm (FAA), in part due to the ten-year gap between the retirement of the Harrier and the arrival of the F-35B and the Queen Elizabeth-class aircraft carriers. Flying high performance aircraft off a carrier demands not only a high level of skill, but also a considerable amount of courage and determination, not least to land back on a very small piece of real estate bobbing about in a rough sea, often at night, with no possibility of diversion. The nature of these operations has meant that the accident rate and aircrew losses were very high - and accepted as part of the job. With the arrival of the Queen Elizabeth and the Prince of Wales, it is time to redress the balance and bring the FAA's extraordinary story to the audience it so richly deserves through the words of those air and ground crews who have been part of it since 1945. What emerges is an amazing close-knit esprit de corps, often accompanied by a long-standing and still simmering rivalry between the RAF and the Royal Navy over who should project air power overseas. Enormous respect is shown by the aviators and ships' senior officers for the aircraft handlers and maintainers, who work long hours in a highly dangerous environment on the flight deck. This first volume looks chronologically at every aircraft type flown in an air defence role since 1945. Involvement in conflicts including Korea, Suez, the Falklands, Bosnia and elsewhere is included, and perforce the cost in human lives, even in everyday operations, frequently emerges. Balancing this are the everyday grind, the good times, the humour, the 'runs ashore' and the sense of pride in a job well done. All delivered in the words of the men and women themselves.'

Fleet Air Arm Boys Vol 1
“As La Rochefoucauld once observed, Mr Bond, humility is the worst form of conceit. I have the winning hand,”
Top

TGG, I hope he includes the aircraft directors too. One Chief, later Warrant Officer Rockets waz once described by a Lightning pilot that he was like a wing man but he could not collide with you.

On the RAF-RN, one of my light blue colleagues, same initials as me, was attached to destroyer for what he thought was as an observer during an exercise. On embarking he found he was the D. In the light blue you had to do an extensive training course before being unleashed for real.

As an aside, SB is one of the authors in whose work I am quoted.
Top 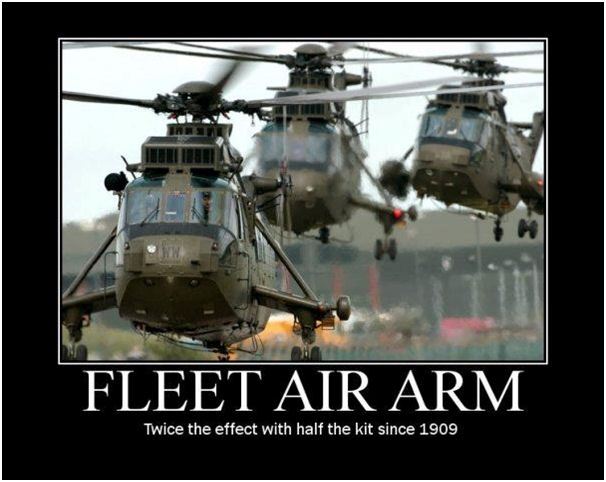 The helicopter pilots' mantra: If it hasn't gone wrong then it's just about to...
https://www.glenbervie-weather.org
Top
Post Reply
110 posts