Does anyone have connections or memories of British Island Airways? this was my first civilian job, I joined in June 1979 at Blackpool as an airframe fitter on £52 a week. The aircraft below was one of the first Heralds that I worked on.
I sat my civil engineers licence with the Herald type rating and stayed with the Company when it became Air UK, based in Norwich, but also working at Guernsey for a period. The company phased out the fleet, replacing them with F27s, most were scrapped, but a handful went on to other Operators, by about 1985 or so they had been completely withdrawn from service by Air UK, but still operated with other carriers until 1999 as cargo aircraft. I spent a large part of that 20 year period involved in line and base maintenance on the Herald, including a three year period as a flying spanner as a secondary duty. 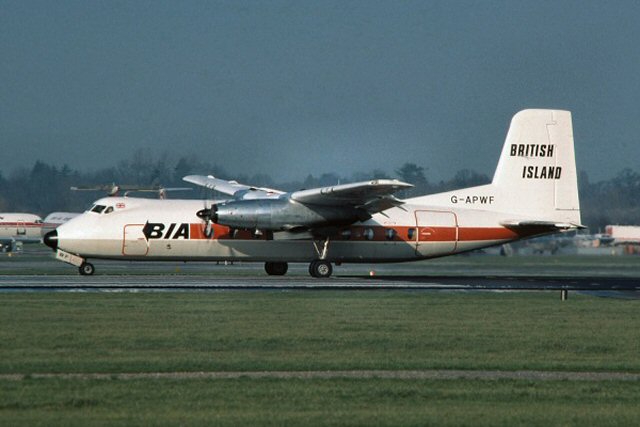 I took my son,then one year old, on his first flight(s) from Blackpool to IOM and return, on a BIA Herald in 1976. It was the family holiday that year. Remember the hire car was a Ford Capri and the gear stick coming off in my hand.

I also remember I had some form of brief involvement when BIA went bust in 1990, what,I do not recall. Certainly remember the MD80s and 1-11s being parked up at Gatwick though.
Top

Just reading this again, I was a shift supervisor at the time and we did the MD83 fleet for Airtours, a full maintenance contract, we had not been doing it long. We had a handling contract with BIA and Engineering on request.
My initiation into the wing ice problem on the 83 came via BIA. It was a balmy humid day in July and my handling supervisor ambled in, it being unprofessional to run, and said, Wod can you come and sort the BIA Captain out he is asking for de-icing and we don't have a rig in summer, nobody does.
I put on my epaulettes for a bit of authority and wandered out to the aircraft, I use the term loosely as it was a Skud, and asked the Captain what was his problem. Silence, he motioned for me to follow until we reached the wing where he had me reach out and feel the upper surface of the wing, sure enough a thick layer of clear ice had formed. It would not have been found without a tactile check. With no further comment he again motioned for me to follow and stick my head out of the open catering door right in front of the engine intake which had several dents round the circumference . The significance was not lost.
I had to explain that de-ice was not possible and we would have to work around it. We removed the cold soaked fuel from the wing and refuelled with ambient temperature fuel and then he had to wait while nature took it's course.
Should be in boring really.
https://www.wunderground.com/dashboard/pws/ITORRO10?cm_ven=localwx_pwsdash
Top

After BIA I spent two stints with CEX, totally just over eight years, I was not type rated on the Electra, although flew in them a few times, but was type rated on the HP7, F27, A300, there is not much in the way of films as they only operated under the cover of darkness, but I found this whilst browsing, brought back some memories.

I flew BAC 1-11 with BIA and had great life experiences flying with people who mostly were nice and tolerant ..important for me !!
Top
Post Reply
5 posts • Page 1 of 1