UP, this has me fascinated, looking forward to more instalments.
A couple of sites that you may find helpful are 'Trove', the National Library's archive of digitised pages, and Sands Directories (for Melbourne, Sands & McDougal). which listed the names and occupations of householders by street. That probably won't help unless he owned a house or was a business proprietor.
Top

I'd completely forgotten about that wee project. It's winter work and I've had other things on my mind.

I'll get back onto it when the weather goes bad again.
Top

I'll call him Pte Skiver and will avoid direct reference to his actual identity as I recognise the possibility that he may perhaps have descendants in Australia who would prefer to imagine him as a War Hero.

He knew all the malingerer's tricks of the day. One favourite, which some of them used, was to induce conjunctivitis by rubbing cordite under the lower eyelid. Bacterially induced conjunctivitis is contageous, so military medics had no choice other than to give some form of sick leave to anyone with the condition.

Skiver managed to wangle a medevac out of Gallipoli by using another ruse. The eponymous symptom of Scarlet Fever was easily imitated by rubbing a slice of beetroot on the tongue. As in the Crimean campaign, the main killer of men in the Dardanelles was disease, so any infectious disease was taken seriously by the medics and a prompt evacuation to Egypt by hospital ship was assured.

I've shown his medical record, which I reproduce here in miniature but readable form, to a couple of well qualified medical people. They both laughed and said that there's no way the chart shows the temperature of someone suffering from Scarlet Fever. One of them reckons that datapoint #5 was probably rigged by briefly dunking the thermometer in a cuppa tea or exposing it to the sun briefly. Certainly not a genuine case. 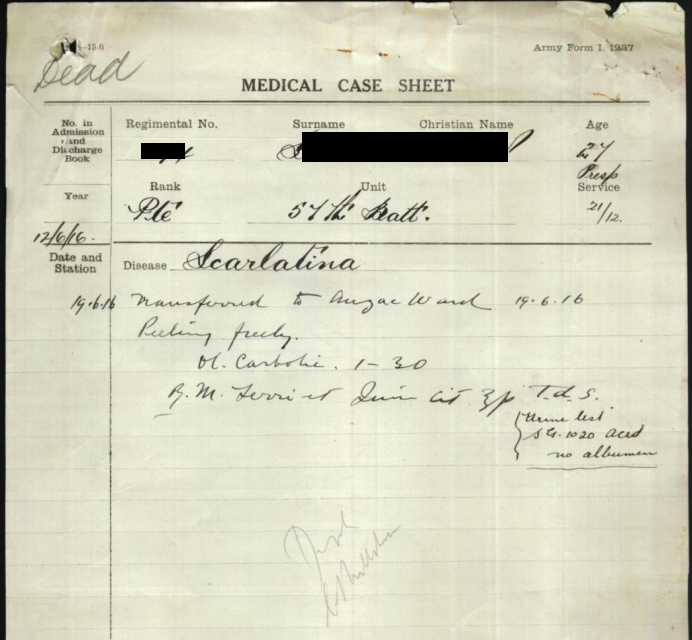 The "Dead" note was clearly made after he died in 1918. It appears on several pages of his service record in the Archive. 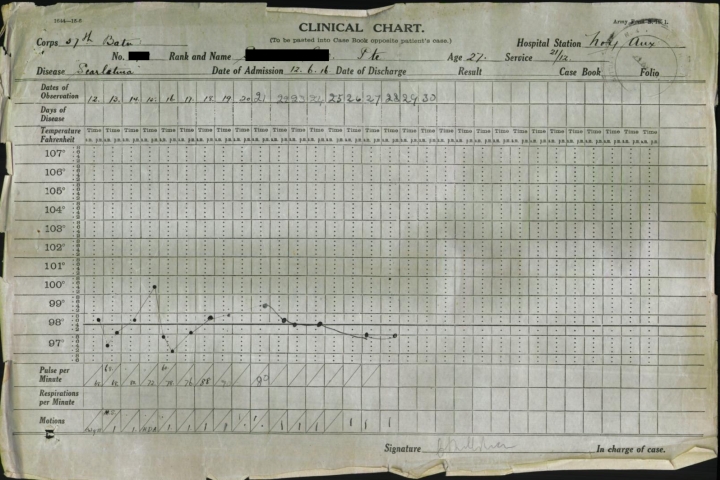 The Battle of Polygon Wood, during the Third Battle of Ypres and part of the Passchendael meatgrinder in which my own Grandfather was wounded, was an extremely serious piece of fighting.

Our man, Pte Skiver, was there. On an offensive patrol, at night, he became detached from his unit and went to ground. A couple of days later he found his way back to his own side's trenches, perhaps lured by the smell of hot food.

One of the tricks known to the serial malingerers looking for a way out was to shout and yell during a barrage to induce throat damage such as laringitis.

Here's his application for medical discharge from active service on the grounds of his sore throat. It was rejected. 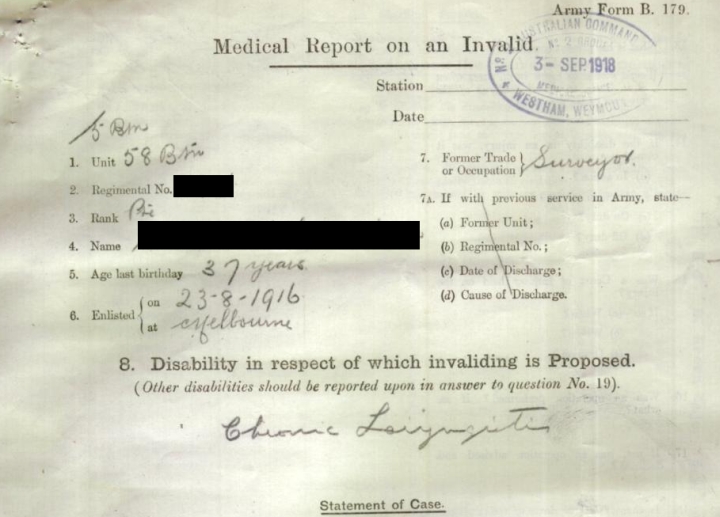 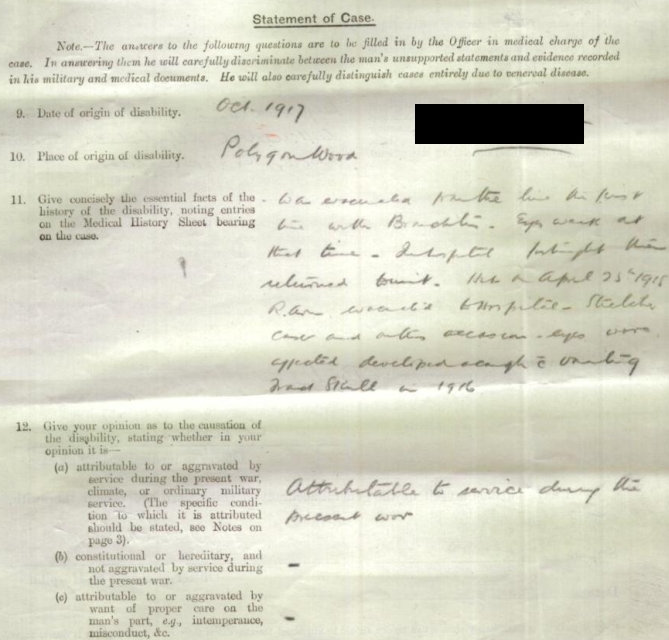 One question it seems that he 'enlisted' in 1916 at age 35.
Why two years late? Was this because of his age (deferred demand)?
Top

The younger age is shown on his gravestone, which was erected by his mother. She, of all people, would know when he was born.

I think the older age he listed when being inducted was one of his attempts to gain exemption from military service. So too was his attempted claim to already have served in a Scottish Regiment. That, too, was bollocks.
Top

UP, you may be able to obtain some information about his pre-enlistment history from the Institution of Surveyors Victoriahttps://surveying.org.au/origins/. If he was a Registered/Licensed Surveyor he will almost certainly have been a member.
Top

I'm very slightly puzzled that the Army doesn't seem to have made any use of his surveying skills. He was in the Infantry and that's all.

Perhaps the structure of the Imperial defence forces in those days was such that Empire troops were to be used solely as cannon fodder and not to provide specialist services such as the Royal Engineers or Royal Artillery or Ordnance Survey.

I've found Oz Surveyors to be bloody good, unlike the Septics who are crap, so it's a bit of a waste if the War Office ignored such a useful human resource.
Top

His wife/widow wrote a few letters to the Army, which are included in his file.

I therefore know her name and her address on the outskirts of a small town in Victoria. The street still exists, but the large house has been demolished and the estate has been turned into a suburban housing estate. I know that it was rented accommodation, not owned by either of the couple.

In the winter I'll learn how to research Strine civil records online and look to see if they had any children.

I know that he had sisters, as they are mentioned in the formal Report of his burial, so there are likely to be great nephews and great nieces in Scotland. They should be easy enough to trace with the combination of Ancestry.com and FindMyPast.
Top

In the British Army conscription only started in 1916. Australia did not have conscription but it was proposed in 1916 and again 1917. Gallipoli ended in Jan 1916 and it might be inferred that there was a recruiting drive in 1916.
Top

Conscription during the First World War began when the British government passed the Military Service Act in January 1916. The act specified that single men aged 18 to 40 years old were liable to be called up for military service unless they were widowed with children or ministers of a religion. There was a system of Military Service Tribunals to adjudicate upon claims for exemption upon the grounds of performing civilian work of national importance, domestic hardship, health, and conscientious objection. The law went through several changes before the war ended. Married men were exempt in the original Act, although this was changed in June 1916. The age limit was also eventually raised to 51 years old. Recognition of work of national importance also diminished, and in the last year of the war there was some support for the conscription of clergy. Conscription lasted until mid-1919.

He was conscripted in August 1916.
Top

Just speculating, but perhaps he 'upgraded' his qualifications to Surveyor from field hand or chainman, in the hopes of landing a cushier job or even a commission. If he did, it would almost certainly be quickly discovered.
As you say, if he really was a surveyor, he would have been snapped up by the surveyors, engineers or gunners - whoever could grab him first.
Top
Post Reply
34 posts

Return to “Non-Aviation Things of General and Historical Interest”