When calculating range for a nuclear bomber, it only requires a one-way journey, with a self-destruct in the event of a recall, Shirley?
Top

G CPTN, absolutely true but unless you were French we always planned to come home. Logic said there would be nothing to come home to but we still made plans.

Even if shot down we had an escape and evasion plan. For CENTO targets we were not enthused when NEAF came up with a cunning plan which would have involved bailing out within 50 miles of the target.
Top

Convair made some very interesting aircraft (both military and civil) before they became defunct. One of them was the F-106 Delta Dart. 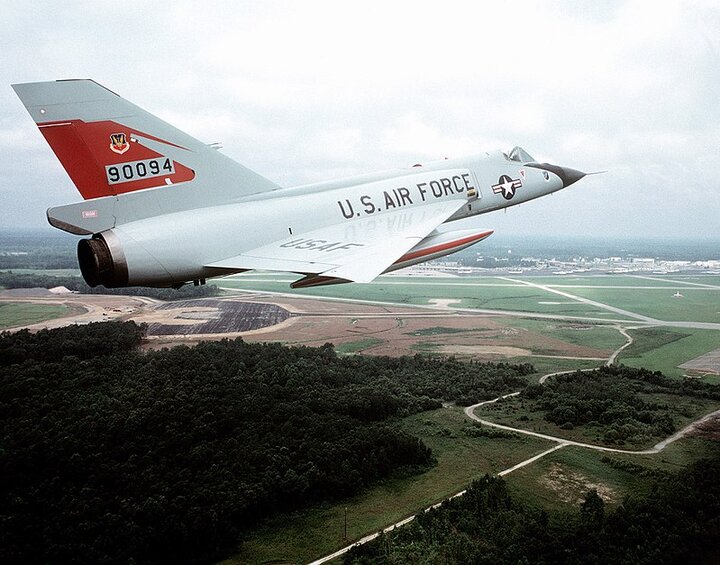 One of which was involved in this rather bizarre spin... 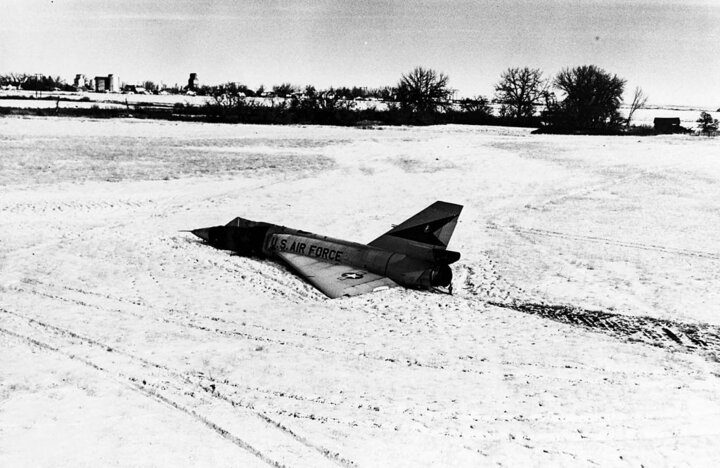 The individual aircraft was manufactured by Convair in 1958 and received the tail number 58-0787. It served with 71st Fighter-Interceptor Squadron based at Malmstrom Air Force Base adjacent to Great Falls, Montana. During a routine training flight conducting aerial combat maneuvers on February 2, 1970, the aircraft entered a flat spin. The pilot, Captain Gary Faust,[2] attempted to recover, deploying the aircraft's drag chute as a last resort;[3] recovery proved to be impossible. Faust fired his ejection seat and escaped the stricken aircraft at an altitude of 15,000 feet (4,600 m).

The reduction in weight and change in center of gravity caused by the removal of the pilot, coupled with the blast force of his seat rocketing out of the plane pushing the nose of the aircraft down, which had been trimmed by Faust for takeoff and idle throttle, caused the aircraft to recover from the spin.[5] One of the other pilots on the mission was reported to have radioed Faust during his descent by parachute that "you'd better get back in it!". From his parachute, Faust watched incredulously as the now-pilotless aircraft descended and skidded to a halt in a farmer's field near Big Sandy, Montana. Faust drifted into the nearby mountains. He was later rescued by local residents using snowmobiles.

Shortly thereafter the local sheriff and local residents arrived at the scene of the crash. The thrust from the still-idling jet engine allowed the aircraft to slowly drift on its belly along a field. The sheriff, having contacted the air base, was informed that he should simply allow the jet to run out of fuel, which occurred an hour and forty-five minutes later without further incident. A recovery crew from McClellan Air Force Base arrived on the scene and began to dismantle the aircraft, removing its wings for transport aboard a railroad flat car. The damage to the aircraft was minimal; indeed, one officer on the recovery crew is reported to have stated that if there were any less damage he would have simply flown the aircraft out of the field.

https://en.wikipedia.org/wiki/Cornfield_Bomber
A boy has never wept nor dashed a thousand kin you can play jacks. Girls do that with a soft ball and do tricks with it.
Top

TheGreenGoblin wrote: ↑
Tue Sep 15, 2020 1:10 pm
Convair made some very interesting aircraft (both military and civil) before they became defunct.

Here's one that I remember:-
POGO
Top

Same thing happened with the F4. One in the US entered a spin at about 65k, during recovery the TBC was deployed but didn't work. The crew ejected and the aircraft performed a perfect belly landing in the desert.

A second happened in Vietnam and it made an unmanned recovered on an N V beach. A strike was called in to destroy the F4J and stop the advanced P D radar falling in to Russian hands. In the time between his formation crews departing low on fuel and the strike arriving the F4 was disappeared.

It was probably covered in foliage and recovered after dar k.
Top

It certainly was an eccentric aircraft. The test pilot was also an accomplished helicopter pilot.

Another from the odd stable...

Pontious.
It was certainly recovered and can be seen today on display in Ha Noi.