The only airworthy Canberra in the world was back in air in Tremora. Alongside the Shuttleworth Collection's Wren Ultalight, this Canberra is the only other flying BAC aircraft anywhere in the world! Good on the Aussies, keeping the thunder going Down Under.

WJ680 entered service in December 1955 as part of 551 Wing RAF Bomber Command based at Gutersloh, Germany. However, in February 1956, it suffered damage that resulted in a 12 month removal from service. Shortly after its return to 59 Squadron, the aircraft again suffered extensive damage from a bird strike during a low level training mission, damaging the canopy, engine cowlings, tailplane and the wooden fin fitted to the UK built machines.

English Electric Canberra
Repaired yet again, the aircraft was reassigned to a UK based maintenance unit where it remained in storage for 10 years. In 1967, it was removed from storage and converted by British Aerospace to TT.18 standard, carrying the Rushton designed target-towing system but, was again placed in storage until 1971. In December 1972, it was involved in yet another incident, which resulted in the ejection of the navigator. More repairs followed and it returned to 7 Squadron on target towing duties until 1980, flying without incident, at which time it returned to British Aerospace at Salmesbury for major servicing.

Returning to 100 Squadron where it remained on strength until 18 December 1991 when it performed its last flight in RAF service. It was placed in open storage at RAF Wyton until sold in 1992 to Ron Mitchell. In 1994, G-BURM performed its first civil display at Duxford.

Temora Aviation Museum acquired the aircraft in May 2001. Upon acquisition, the Museum repainted the aircraft to represent those flown by the Royal Australian Air Force 2 Squadron during the Vietnam conflict. The aircraft is maintained in an airworthy condition and remains to this day the only English Electric Canberra flying in Australia.

This aircraft is now part of the Air Force Heritage Collection after being generously donated by the Temora Aviation Museum in July 2019.

The Canberra Bomber returned to flight on the 28th June 2021. 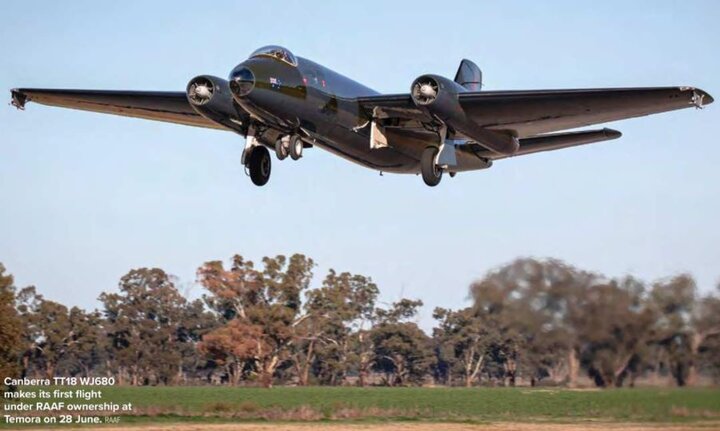 After a significant effort over a number of years, we are happy to report that the Temora Aviation Museum successfully performed a test flight with their English Electric Canberra TT.18 WJ680 on June 27th, 2021. The flight, the aircraft’s first in a decade, took place at the museum’s home airport in Temora, New South Wales, just 150 miles or so north west of Australia’s capital city of Canberra. Outside of NASA’s fleet of three WB-57 Canberras, WJ680 is presently the only currently airworthy example of the breed anywhere in the world, although that will hopefully change in the not-too-distant future, with at least one other example under restoration to fly in the USA (B.6 XH567 at Lampson Field, Lakeport, California). Video clips by Matt Scott and Temora Flyers Inc

Shame they had to scrap all the B(I)8s, thought they looked the bizz too.
Top

The South Africans flew the Canberra B(I) Mk12 which definitely looked the bizz! 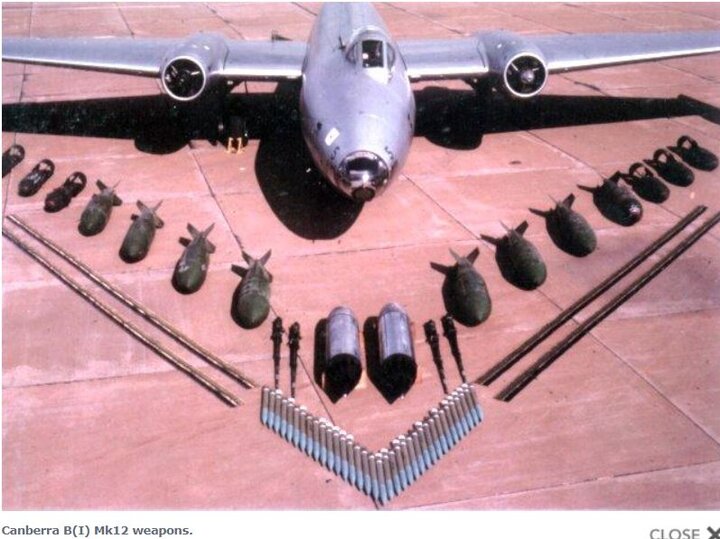 It looks distinctly lop-sided with that cockpit.
Top

Many years ago, working for a UK defence company, I was up on the edge of the Mendips at a test site with some long-serving staff. This was used to test various radar gadgets, and they would run tests with Canberra bombers which could fly past pretty close with plenty of altitude on one side of them for safety so measurements could be taken. The tale is told of one flight where, having done his run, the pilot turned out over the Somerset Levels and did a straight in run at the test site, and was close enough to the ground as he reached the top of the cliff that people were throwing themselves at the ground as he did a low pass. Apparently on approach those on the ground could look the pilot in the eye as he came towards them, and I suspect none of them expected him to keep going, assuming he would break off the approach.
Top

It looks distinctly lop-sided with that cockpit.

It is what the South Africans call a "ons hou jou dop" or "are you checking me skeef" houding!

Translated from both Afrikaans and Saffer English, it means "we are keeping an eye on you" and "are you looking at me sideways?" attitude!

Are you sure it is the only one flying...there is one at my home airport in California, although have not seen it actually fly in a year or two.....I will investigate when I get back home.

G~Man wrote: ↑
Tue Sep 14, 2021 3:57 am
Are you sure it is the only one flying...there is one at my home airport in California, although have not seen it actually fly in a year or two.....I will investigate when I get back home.

What I meant to say is that the Canberra noted in this thread, is the only EE built version flying in the world at the moment. I am not counting US Martin built aircraft in that definition.

I must check with my cousin if he worked on this while he was on 100 Squadron, mind you think he spent most of his time in Sylvanas kebab house, Akrotiri.
When all else fails, read the instructions.
Top
Post Reply
9 posts • Page 1 of 1