Written in an over-excited style and inaccurate in places, like being able to manoeuvre a submarine accurately under a hovering helicopter, the basis of this story is true. The HSS-1 was basically a fore-runner to the turbine engined Sikorsky S58T, built under licence by Westland as the Wessex 1 initially. The HSS-1 was fitted with a large rotary Leonides-type piston engine and was used successfully by 25 armed forces around the world. The French Navy was still using them in 1973 and I was lucky enough to be taken on a local navigation exercise in one around the Toulon area. The pilot was a keen pipe smoker and when he had finished he banged the still smoking pipe on the window frame to empty it. Avgas? - pas de probleme! 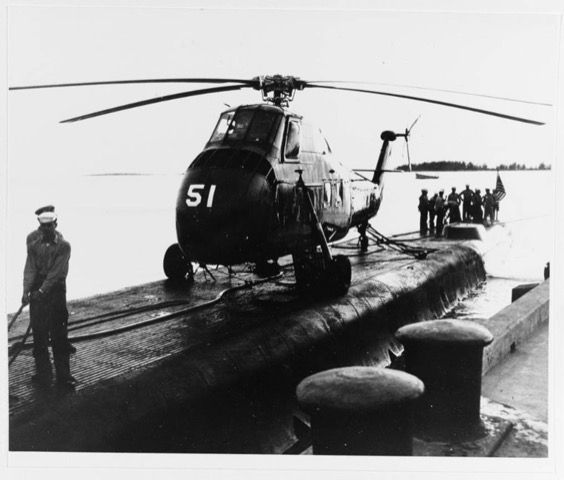 Good one FD2. Most enjoyable read.

Quite amazing. Another piece of fantastic military aviation history un-earthed. Thanks, FD

Presumably the idea in the head of 'Soapy' on the Alraigo in '83...

Poor lad! If only he had remembered the brakes...
The main thing is to take care of the main thing.
Top

Amazing story - good read!
Thanks - more like that?
Top

The guests were escorted down the hatch and offered food and drink,

Being a USN boat, not of the alcoholic kind

A great story, thanks.
Wine improves with age
I improve with wine

A good Boys Own story though.

......realized that he was losing oil quickly from the main rotor assembly......

How would he know it was from the main rotor - unless it started shuddering itself to bits. Damper assembly?

....The Corporal carefully positioned itself directly under the still-hovering helicopter......

....The mechanical issue with the helicopter prevented it from turning in any direction; hovering was still functional, but no adjustment in heading could be made from the cockpit.......

Me no understand this. More likely was that he didn't want to disturb the status quo of being in the hover more than he had to and only manoeuvred sideways to land once the submarine was alongside.

......Navy mechanics made the necessary repairs to the helicopter rotor casing. ...The broken oil casing was replaced, and the chopper again was ready for flight.

Oil casing? Would make it appear to be the main gearbox? That wouldn't stop him turning. It must have been something to do with the main rotor damping.

A good bit of flying though - absolutely no room for error. No emergency flotation gear available on helicopters in the 50's, no wonder he didn't want to ditch unless he had to. At least those up front of RN Wessex in our time kept their feet dry in the event of a ditching - as long as the flotation gear worked!
. 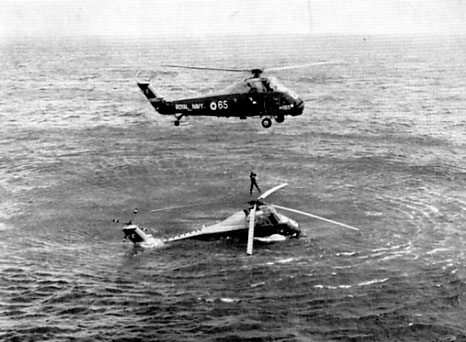 Nice pic C16, BOAC could you give us a lead about your story?
Top

Sea Harrier did an emergency landing on a Spanish Cargo ship: the Alraigo
Top

....or if you don't want to know about G-CPTN's link to the new St Albans Post Office

The Alraigo Incident
The helicopter pilots' mantra: If it hasn't gone wrong then it's just about to...
Top

Oh dear - I normally check my links after I have p*sted them . . .
Top

'Soapy' Watson showed good initiative for someone with so few hours under his belt. If the container hadn't been slippery, or he hadn't forgotten the brakes, or the captain hadn't altered course or speed, etc., he would have been feted, but it's good to see he wasn't put off and went on to get nearly 3,000 hours before leaving, including an exchange with the USN - great stuff. It would be interesting to know what was happening on the Alraigo's bridge - the noise must have been absolutely deafening!

The submarine helicopter carrier story was originally published in 'American Submariner' which accounts for its lack of anything but the most basic knowledge of helicopters.

An instructor from 706 Squadron down in Culdrose was seconded to 737 Squadron in Portland in 1972 to take all the Squadron Wessex pilots, plus those of the County Class ships' flights who happened to be disembarked, through a series of engine off landings. The Wessex 3 was not usually put through this manoeuvre as it had to have the heavy sonar removed to lighten it (a tedious task), and the little runway at Portland wasn't long enough for this sort of training, also having aircraft parked close by, so they had morning and evening sessions up at Lee-on-Solent for a week. By the end of the sessions the instructor, the late I.J. was very practised indeed.

He was made use of the next week doing QHI checks on some of the pilots at Portland and practising auto-rotations to the short runway, but to the hover or over-shoot only. He shut the throttle downwind on one pilot, who misjudged their position and so would have ended up short of the runway. Then they noticed that the engine was running down to stop and a ditching in the harbour was the only choice. I was pulling on my goonsuit to take the QHI's victim's place when the alarm klaxon went off right above my head and made me jump out of my skin. IJ did a perfect ditching in the harbour, all the flotation bags worked and the two pilots climbed into the seaboat, which had been dispatched from a nearby ship, without getting their feet wet. IJ lost his aircrew watch somehow...

The flotation gear in the various marks of Wessex gave precious time for aircrew to escape and saved many lives. The HSS-1 probably didn't have much of a power margin anyway and I don't know if it was ever fitted with floats, as I haven't found a photo showing them yet.
The main thing is to take care of the main thing.
Top
Post Reply
14 posts • Page 1 of 1