Advert for the Vought-Sikorsky VS-300

Advert for the Vought-Sikorsky VS-300

I have been watching Neil Armstrong's First Flights TV series and was pleased to see this delightfully non-PC 1940' advert/demo, featured in the series, extolling the virtues of the Vought-Sikorsky VS-300 helicopter as a family runaround. It seems that the dream of a flying machine for every family still burned optimistically bright in those days but, as Sikorsky himself admits in the film, the scene portrayed is futuristic, and that the model is actually aimed at the military

The advert is well worth watching as it is historically interesting, and if not for that then for a smile at the mention (and patronisation) of "petrol boys", a married man's burden and the nagging little wife or missus at home, an absolute stunner by the way who is showing an extraordinary amount of breast (OK maybe I imagined her breasts) and leg for a 1940's advert! No wonder this ardent husband come pioneering helicopter pilot and commuter rushed home from the work parking lot!

For the helicopter pilots and enthusiasts, the VS-300 is fascinating demonstrating the birth of the modern helicopter during wartime USA.

Hadn't seen that one before - thanks for posting it!
The helicopter pilots' mantra: If it hasn't gone wrong then it's just about to...
Top

Glad you enjoyed the video. There are some wonderful old nostalgia videos on YoutTube that I hadn't seen, like this one from a British perspective that echoes the concept of a utility aerial vehicle, read helicopter, for the well heeled British man in this case.

Ah, the Ripley Helicopter Garden Parties! I only went once, in 1970 I think. I flew the General Manager of the Port of Bristol Authority, plus his wife and the first Mrs C16 to Charles Hughesdon's and the actress Florence Desmond's place in Surrey. That was in the Authority's own helicopter. A great day out - I can only find a couple of poor quality photos I took on that day. Hughesdon lived to be 104. An amazing character - here's his obituary:Charles-Hughesdon's obituary
.

.
EDIT: found another photo, this one of the Port of Bristol Authority Bell 47J2 with the GM and his wife posing:
. 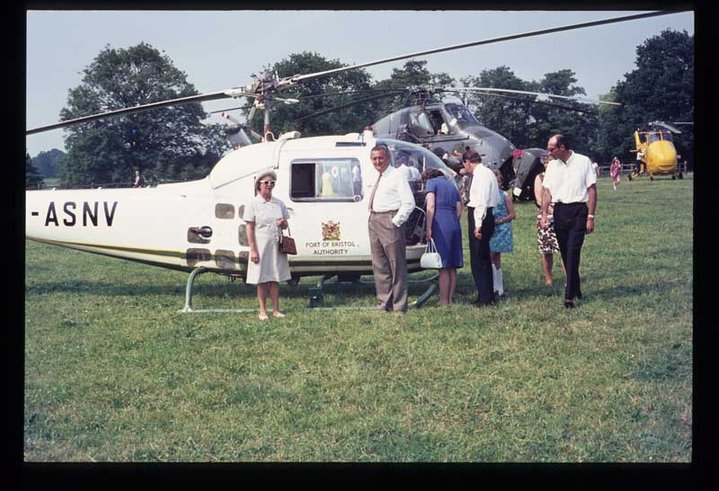 What an extraordinary, successful and adventurous life. They certainly don't make them like that anymore. Wonderful and historic photos by the way. Thank you for posting.

As for the dancing, the chap who taught me to fly was a champion ballroom dancer and all round nice person as well. Last heard of poling BA aircraft around the world.
A place down in Mexico
Where a man can fly over mountains and hills
And he don't need an airplane or some kind of engine
Top
Post Reply
5 posts • Page 1 of 1