Hurricanes, or not. A DIY predictor

Hurricanes, or not. A DIY predictor

In keeping with the Project Fear theme of the media, this year was widely advertised as being likely to be an above average hurricane season.
However, so far, none at all.
So, how does one tell whether hurricanes are likely, say for holiday planning?
I should mention at this point that I am not professionally qualified in this. I did spend 4 months monitoring the 2008 hurricane season closely prior to a sailboat crossing.
.
Firstly, global warming(TM) has not made a noticeable difference to the Accumulated Cyclone Energy of each season.
.
Here is a useful primer on how the lateness of the first hurricane (average date being July 24th) affects the likely number of named hurricanes
https://weather.com/storms/hurricane/ne ... =hp-slot-1
In short, the first hurricane being more than three weeks earlier (July 3rd) or later (Aug 14th) than the average means less hurricanes in total that season.
.
The two main factors are Sea Surface Temperature and Windshear. 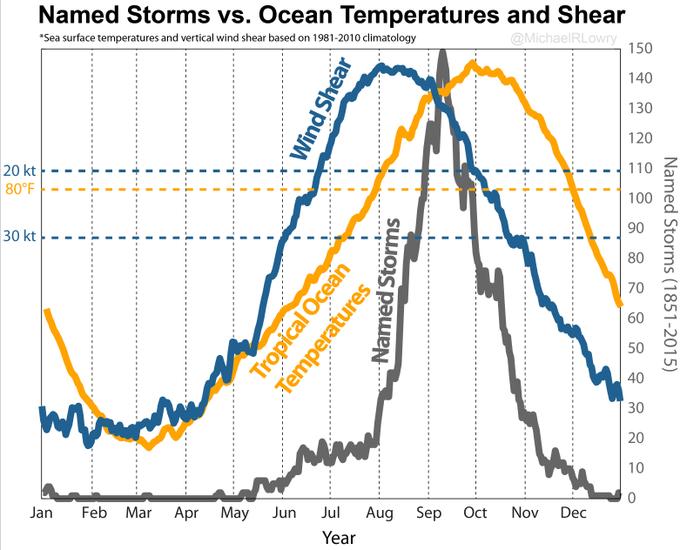 This is taken from @MichaelRLowry
.
Note that the windshear axis is inverted to show how the extremes affect each other - the peak represents Low windshear.
.
End of part 1 (of 2), due to link limit
Top

The current SST is at
https://www.nhc.noaa.gov/sst/
.
The current windshear can be obtained at
http://tropic.ssec.wisc.edu/real-time/w ... 8&prod=shr
.
And a handy link for actual hurricane activity is
https://www.wunderground.com/hurricane
They tend to have better piccies and more general analysis than the official NOAA site, which can be got via the SST link.

Given the 2022 season has zero Atlantic activity currently, and the time it takes for a hurricane to develop, it's likely we will get a below average season.

Corrections and Comments welcomed, as ever
Top

The current SST is at
https://www.nhc.noaa.gov/sst/

Given the 2022 season has zero Atlantic activity currently, and the time it takes for a hurricane to develop, it's likely we will get a below average season.

Corrections and Comments welcomed, as ever

Look at the prevailing wind system on the West coast of Africa and see where the Saharah sand is going to have one predictor of what the hurricane season in the Caribbean might look like.


Look at the green glow in your mistress's nail varnish and then look at the Sahara dust!"
They told me that I knew **** nothing, and I told them that I knew **** all - with apologies to David Niven.
Top
Post Reply
4 posts • Page 1 of 1