Was the capsule designed to look like the boss's bonce?

That was brilliant. Congratulations to all. Wally made it eventually!
Top

What about 14 days in hotel quarantine?

They made it look easy. That, IMO, is an indicator of true expertise.

Sure, theirs is a technology which cannot be expanded or extended to match the truly stupendous achievement more than sixty years ago of putting Gagarin into actual orbit, but they achieved their little accomplishment in good style by imitating the first fraction of the climbout that would have been needed to get into proppa orbital "spaceflight". The did it well.
Top

Obviously, I am wondering how fast the second fight of each project is organized. And then the third and then the fourth...
Top

Sure, theirs is a technology which cannot be expanded or extended to match the truly stupendous achievement more than sixty years ago of putting Gagarin into actual orbit, but they achieved their little accomplishment in good style by imitating the first fraction of the climbout that would have been needed to get into proppa orbital "spaceflight". The did it well.

And the coverage on the web wasn't like the Virgin cringemaking farrago!
Depressed, feeling a slump, then remember Lift = Coefficient of Lift x 1/2 x ρ x V-squared X S!
Top

CNN seems to have far more coverage of Blue Origin's flight than that of Virgin Galactic.
Props to Bezos for gifting awards to Van Jones and Jose Andres.
Of course $100,000,000 is a rounding error to him, but still its a start.

The cynic might note that this is probably because Bezos is American and Branson is not.
Top

Is this what they call "Conspicuous Consumption"?

Bezos thanks the Amazon punters for paying for his flight.
Top

Yes that is what we call 'clever' in this country.
Top

The cynic might note that this is probably because Bezos is American and Branson is not.

New Yorkers seemed entirely nonplussed by, or even totally disinterested in, the whole phallic Bezos event...

A few people were seen gathered to watch Bezos’ 11-minute flight, but footage shows most people strolling past the screen without paying much attention to it.

While Mr Bezos has suggested the feat could be a major step for space tourism and research, critics have argued that billionaires should spend their money on tackling issues on Earth.

As I discovered in New York when I was working there back in the 90's, if you stopped and gawped, like a tourist, you would be given short shrift by the typical, ever moving, native New York pedestrian (a sin almost as bad as dithering in a NY Deli). Only the quick and the dead, and one has to wonder whether or not the, often zombie like, pedestrians are really more dead than alive after all. 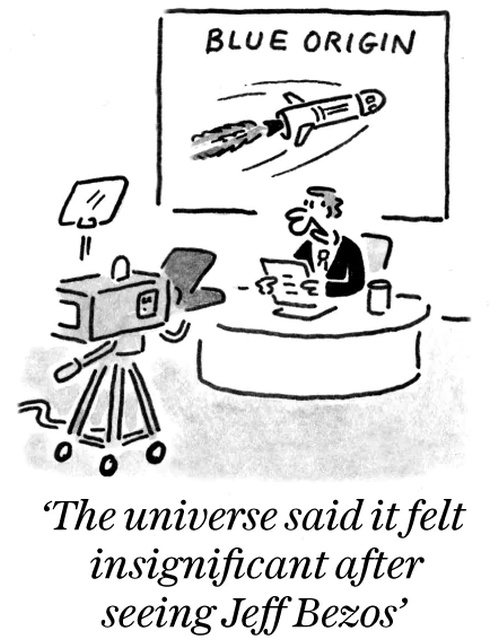 (CNN)Even though Jeff Bezos crossed into space on Tuesday, he still may not get his official astronaut wings from the federal government.

On the same day as Blue Origin's first human spaceflight, the Federal Aviation Administration announced a change to its Commercial Astronaut Wings Program for the first time in 17 years. This shift at the dawn of the space tourism era means the US government may not formally recognize that billionaires Jeff Bezos and Sir Richard Branson became astronauts when they blasted into space earlier this month.
Before the FAA issued the new restrictions, Bezos, along with three other crewmates who flew with the Blue Origin founder, would have qualified to receive FAA commercial astronaut wings. That's because the travelers flew to an altitude of at least 50 miles (80.5 kilometers), the US-recognized boundary of space.
That was true until a few days ago.
Effective July 20, the FAA issued one more critical criterion: Commercial launch crew members must also demonstrate "activities during flight that were essential to public safety, or contributed to human space flight safety," an FAA spokesperson said, quoting the new order.

Astronaut wings were first awarded in the early 1960s to the Mercury 7 astronauts Alan B. Shepard, Jr., and Virgil "Gus" Grissom by the US Navy and the US Air Force, respectively. It became a rite of passage for all NASA astronauts, from the Apollo missions to the Space Shuttle progam. The FAA created the Commercial Astronaut Wings Program in 2004 after Virgin Galactic's SpaceShipOne became the first private spacecraft to reach space.
David Mackay and Mike Masucci, the two pilots for Virgin Galactic's SpaceShipTwo flight on July 11, had already received their astronaut wings. So had one of the mission specialists, Beth Moses, on a previous test flight. But the three other mission specialists, including Branson, were first-time fliers and were on board to either evaluate the astronaut experience or conduct suborbital scientific research. Neither activity would explicitly qualify them to receive their wings under the FAA's new order.
The four crew members on board Blue Origin's first crewed flight did even less during their 10-minute-long suborbital flight. The company's CEO, Bob Smith, explained during a prelaunch mission briefing that the New Shepard spacecraft "is an autonomous vehicle. There's really nothing for a crew member to go do."
A spokesperson for the FAA said the shift was made because it "aligns more directly to the FAA's role to protect public safety during commercial space operations." The FAA did not respond to an inquiry about why the change took effect on the same day as the Blue Origin flight.
When asked what the change in policy means for the most recent space tourists, an FAA spokesperson said that, in order to get astronaut wings, a nomination is required.
"There are no nominations currently before the FAA to review," the spokesperson said.
Sign up for CNN's Wonder Theory science newsletter. Explore the universe with news on fascinating discoveries, scientific advancements and more.
There is one caveat in the new regulations that may still allow Branson, Bezos and some of their crewmates a chance to become formally recognized by the FAA as astronauts. The new order allows the agency to issue an honorary award to "individuals whose contribution to commercial human space flight merits special recognition." It's up to the sole discretion of FAA's associate administrator for commercial space transportation to determine who qualifies for the "honorary" astronaut wings.
Blue Origin and Virgin Galactic did not immediately respond to CNN's request for comment about whether or not they plan to nominate any of their recent crew members, including Bezos and Branson, for the program.

Isn't there something faintly absurd about giving an astronaut "wings"?

What thefuck use are wings in space? Beneath and within the troposphere: yes. Useful things. Above those levels: fekkin useless and meaningless clutter.

They seem to work on Mars?
Top

I am with the FAA on this one.
Depressed, feeling a slump, then remember Lift = Coefficient of Lift x 1/2 x ρ x V-squared X S!
Top

Ah! They be flingwings, not proppa wings like wot we got on our Flying Badge after flying a JP, in the days when men walked on the moon and didn't need wings so to do.

All those guys needed was a Hasselblad and a golf club.

Did they have shoulder patches with crossed wheels in order to drive the moonbuggy?

Did they earn a triple parachute emblem when they survived lower atmosphere re-entry?

Will Boy Scouts of America create a badge for sons of billionaires and their achievements?

There's already a Tesla Roadster on Mars, y'know. Fekkin thing can't find a Supercharger near enough to get to, though. So it's fucked.

Solar City is so far away!
Top
Post Reply
38 posts