There is a good article in this week's Aviation week. 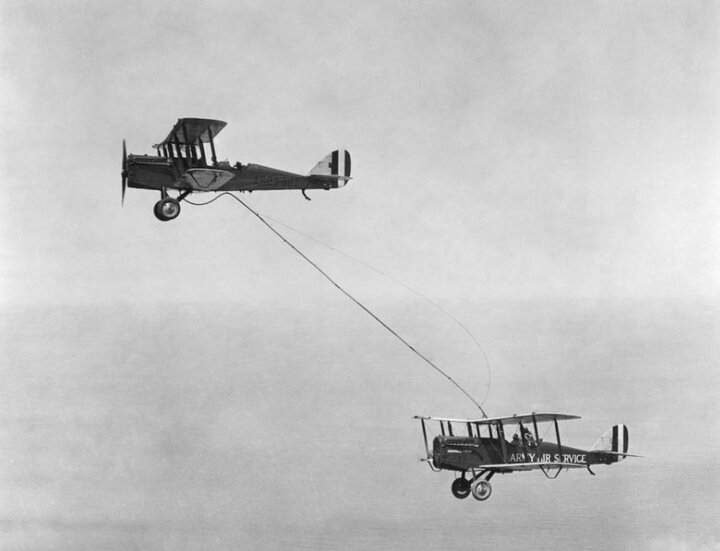 Re: In flight refuelling! AtoA.

Methinks there is a "question mark" over the accuracy of some of the claims in the first video!


Some of the earliest experiments in aerial refueling took place in the 1920s; two slow-flying aircraft flew in formation, with a hose run down from a hand-held fuel tank on one aircraft and placed into the usual fuel filler of the other. The first mid-air refueling, based on the development of Alexander P. de Seversky, between two planes occurred on June 27, 1923, between two Airco DH-4B biplanes of the United States Army Air Service. An endurance record was set by three DH-4Bs (a receiver and two tankers) on August 27–28, 1923, in which the receiver airplane remained aloft for more than 37 hours using nine mid-air refuelings to transfer 687 US gallons (2,600 L) of aviation gasoline and 38 US gallons (140 L) of engine oil. The same crews demonstrated the utility of the technique on October 25, 1923, when a DH-4 flew from Sumas, Washington, on the Canada–United States border, to Tijuana, Mexico, landing in San Diego, using mid-air refuelings at Eugene, Oregon, and Sacramento, California.

Similar trial demonstrations of mid-air refueling technique took place at the Royal Aircraft Establishment in England and by the Armée de l'Air in France in the same year, but these early experiments were not yet regarded as a practical proposition, and were generally dismissed as stunts.

And the US effort wasn't a stunt?
I see a bad moon rising...
Top

One shudders to think of the stress of doing this at night, in IMC, low on fuel, with Cb's and turbulence in abundance and nowehere to divert to!
I see a bad moon rising...
Top

Only BOAC would have spot E
Top

night, low on fuel, with Cb's and nowehere to divert to!

The Vulcan at Scotland's air museum is the one which snapped off its aar probe and had to go and take a sabbatical at Copa Cabana, poor dears. Not much more than a smell of fuel in the tanks on shutdown. Don't want to think of the smell when the crew took the bicycle clips off their flightsuits.

My question about that video, particularly the first half, is whether the apparent PIO in roll is due to the absence of ailerons - or do the spoilers simply make the PIO more conspicuous?
Top

Most fun one can have with pants on: (Not my pics, but I have been on-board doing this a few times). Probably the demise of the Nimrod.... 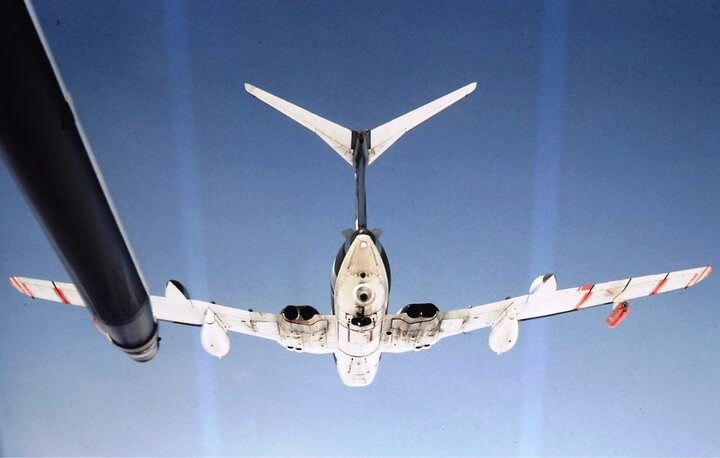 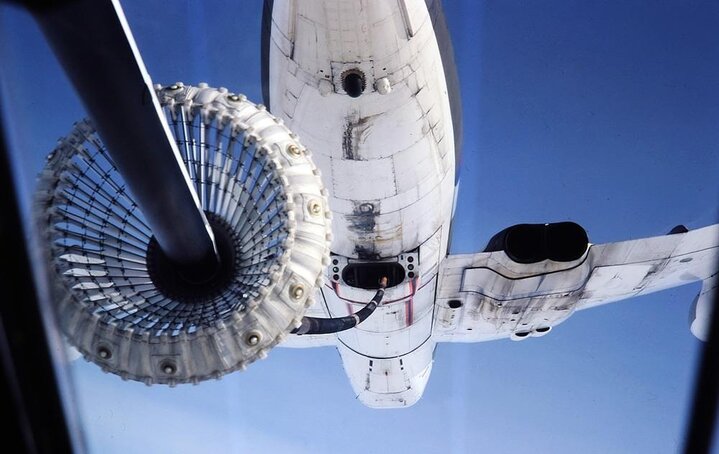 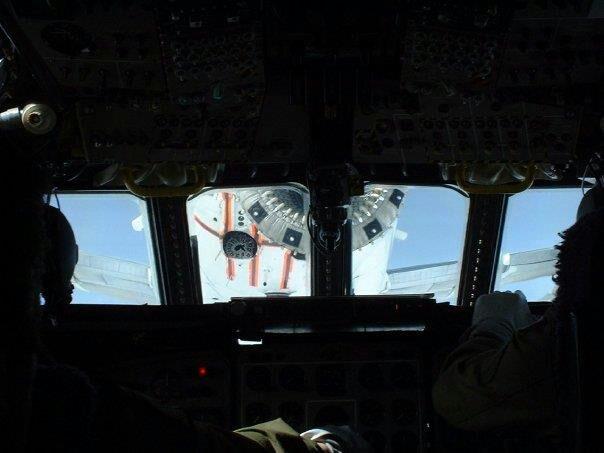 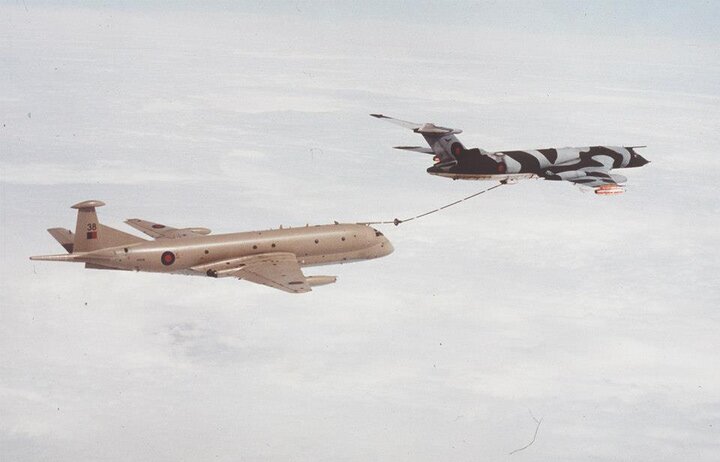 It does change the perspective from the inside. TGG you did add a set of circumstaces that render the situation pressing and the failure of the refuelling a necessity
Top

Do aircraft being refuelled have an alternative (diversion) landing site in case of failure to refuel?
Top

I was on an E3 that was controlling an F4 from Leuchars intercepting a Bear up north, once the Bear turned for home the F4 asked for a course to the tanker, the U/T fighter controller said "Tanker?" whereupon the F4 driver said "If you haven't got a tanker, get me a big yellow helicopter", the FC trainer took over and pointed the way to the tanker, and everybody went home without getting wet.
Top

G-CPTN wrote: ↑
Mon Oct 11, 2021 9:39 pm
Do aircraft being refuelled have an alternative (diversion) landing site in case of failure to refuel?

Nope---we would work in the mid-Atlantic in Nimrods and get have insufficient fuel to reach land.

I have always been mightily impressed with the flight planners and the logisticians that planned Operation Black Buck. 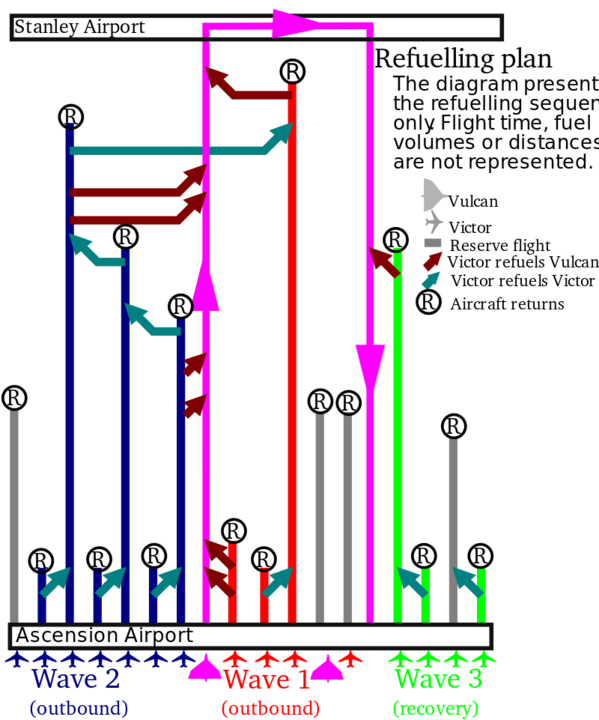 Was all that planning, effort and risk in the Blac Buck Operations useful?

The Effectiveness of Black Buck

There has been considerable debate about the effectiveness of the operation. Some critics have described the contribution of the bombing runs as “minimal” (Ward, 1993). Although Mirage fighters were pulled back to Argentina following the raids, Argentine C-130s continued to use the runway at Port Stanley until the end of the war (White, 2012 Blackman, 2016).

The idea that the raids caused considerable fear of an attack on the mainland has been dismissed as “propaganda” by formal royal navy commander Nigel “Sharkey” Ward. In his 1993 work Sea Harrier over the Falklands, Sharkey states:

“The Mirage IIIs were redrawn from Southern Argentina to Buenos Aires to add to the defences there following the Vulcan raids on the islands. Apparently, the logic behind this statement was that if the Vulcan could hit Port Stanley, that Buenos Aires was well within range as well and was vulnerable to similar attacks. I never went along with that baloney. A lone Vulcan or two running into attack Buenos Aires without fighter support would have been shot to hell in quick time.”

In terms of the technical success of Operation Black Buck, there is considerable doubt as to the extent that the bombing raids actually made any significant impact on Argentine operations.

“The most critical judgment of the use of the Vulcan centers on the argument that their use was "...largely to prove [the air force] had some role to play and not to help the battle in the least." This illustrates the practice of armed services to actively seek a "piece of the action" when a conflict arises, even if their capabilities or mission are not compatible with the circumstances of the conflict. Using Black Buck as an example shows the effects of this practice can be trivial and the results not worth the effort involved.” (DeHoust, 1984)


Operation Black Buck was clearly one of the most ambitious combat operations in military aviation history. The skill of the RAF engineers and the bravery of the pilots and aircrew are made clear in the accounts of those who participated in the operation. Though the effectiveness of the operation is questionable at best, the success of such a complex and technically demanding operation means that Black Buck is rightly regarded as one of the Royal Air Force’s finest moments.

I am apt to go along with the final sentence.

Do aircraft being refuelled have an alternative (diversion) landing site in case of failure to refuel?

As G-man says, but nice to have if available! There are some 'refuelling areas' where it is sometimes deemed prudent to remain 'plugged in' while crossing.

Carriers often operate with no land-based alternate as well.
Top

The Black Buck critiques tend to focus on the one bomb. There is a revealling narrative by the young officer in charge of airfield defence at Port Stanley. I think Mercantillian quotes him in TOP.

It was utterly terrifying. The Shrike missions get little acknowledgement but they caused the shut down of the air defence radars. I don't know if this shut down was coordinated and exploited by the Harriers.
Top

Regarding the RAF wanting to get a piece of the action, that is true, but was it a desire to showboat or to contribute?
Remember the C130 s delivered people and spares to the task force.
It was also considered sending the AEW Shackleton to assist. Flying down the back of South America was probably politically impossible as it did not have the range to bypass countries friendly to Argentina. It lacked any possible AAR facility, and one hair brain scheme was questioned, how long could it operate over the task force and then ditch?

A fag packet calculation suggested 10 minutes and with just 5 aircraft it would not help very much.
Top
Post Reply
17 posts • Page 1 of 1