The aircraft seemed to be registered in the Experimental Category which would cover speedbrake, oversized tires, missing door, etc.

Does that cover silliness?

Can you do stoopid things on a Cessna, like put a tipoverarseovertit airbrake for commercial purposes, and get away with it?

Is there a Barney & Bailey Law yet?
Top

I think that they are both in the *sh*t* for leaving their aircraft unmanned. Maybe Red Bull also as the organisers.
'Yes, Madam, I am drunk, but in the morning I shall be sober and you will still be ugly.' Sir Winston Churchill.
Top

ELOY, Ariz. (AP) — The pilot in charge during a forbidden Red Bull plane-swapping stunt said Friday he takes full responsibility for the ensuing crash over the Arizona desert.

Luke Aikins, the lead pilot, admitted in a post on his Instagram that he disregarded a denial from the Federal Aviation Administration two days before Sunday's mid-air crash.

“I made the personal decision to move forward with (the) plane swap. I regret not sharing this information with my team and those who supported me,” Aikins wrote.

He said he would cooperate fully with the FAA and any other regulatory agencies.

Aikins and another pilot flew separate single-engine Cessna 182 airplanes up to 14,000 feet (4 kilometers) Sunday evening as part of a stunt to promote the energy drink company. They tried to switch planes as the aircraft descended.

One plane spun out of control and crashed near Eloy, roughly 65 miles (104 kilometers) southeast of Phoenix. The pilot was able to parachute out safely. The second pilot regained control of the other plane and landed safely.

It was not clear what possible penalties Aikins could face. Elizabeth Isham Cory, an FAA spokeswoman, said the agency does not comment on open investigations. But the FAA provided a copy of a letter denying Aikins' request.

Aikins had petitioned for an exemption from the rule that pilots must be at the helm with safety belts fastened at all times. He argued the stunt would “be in the public interest because it would promote aviation in science, technology, engineering and math.”

Red Bull, known for organizing wild promotional stunts, said in a statement it looks forward to continuing to work with Aikins. The company called him a “courageous, highly skilled athlete” who has been honest about his role in the incident.

A pilot in his 20s climbs into an airplane and takes off to perform a record-setting stunt that is sure to impress his millions of followers. The plot so far might bear a current-day familiarity, but in this case, the year is 1914 and the pilot is Lincoln Beachey.

Beachey was a pioneer of aerial demonstrations and aerobatics during aviation’s first decade and became wealthy by testing his aircraft’s limits while thrilling airshow audiences.

“There is a correlation between Beachey and people who perform aerial stunts today to gain views on YouTube,” says Willie Turner, vice president of operations and marketing at the Hiller Aviation Museum in San Carlos, California, where Beachey’s original Little Looper biplane is on display. “They are all entertaining the audience to an extreme level,” he says.

But aviation regulations and enforcement have changed in the last 100-plus years. Society’s expectations regarding safety have also evolved, so today’s stunt pilots cannot expect the level of freedom and permissiveness that Beachey enjoyed.

Many people have expressed concern online and elsewhere that the FAA might need to change its regulatory approach to properly address what looks to some like a trend toward increasingly dangerous flying in a quest for views, likes, and comments on social media.

William Voss, a pilot and former FAA official, says the agency’s regulations are “very clear,” but that in some cases, the options for enforcement are less so because “there is no clear category” for the types of violations that arise from certain types of stunts, especially when the pilots perform them without permission and choose to disobey regulations. Some of the fines the FAA charges for violations, for example, may be too low to be a deterrent and “a little bit out of date,” Voss says.

“People have gotten better at monetizing social media. They make the calculations and realize they can make more money than they lose by getting the views and paying a fine.”

Voss says the FAA has to be careful about how it treats the Red Bull case. “Unless there is a firm response to this, people might get the message that you can do crazy things with airplanes and get away with it.”

“People have gotten better at monetizing social media. They make the calculations and realize they can make more money than they lose by getting the views and paying a fine.”

Regarding the Red Bull case, the FAA said, “We investigate each incident based on the specific circumstances and take the appropriate steps based on what the evidence tells us.”

The agency declined to comment further, however, it released the letter it sent to Plane Swap pilot Luke Aikins. It explains that the Red Bull group requested an exemption from a regulation that essentially requires pilots to be strapped into seats and flying the plane unless they are performing other necessary duties. The letter also states why the agency denied the request.

In the letter, Robert C. Carty, the FAA’s deputy executive director of its flight standards service, says, “The proposed exemption, if granted, would authorize Luke Aikins and Andy Farrington to depart the flight deck and attempt to swap aircraft in-flight while both aircraft are at vertical dive. During the swap, both aircraft will be unoccupied.

While the Red Bull request refers to the plane swap as part of a project in the public interest that promotes aviation in science, technology, engineering, and math, the agency, in denying the request, says it finds no such public interest. 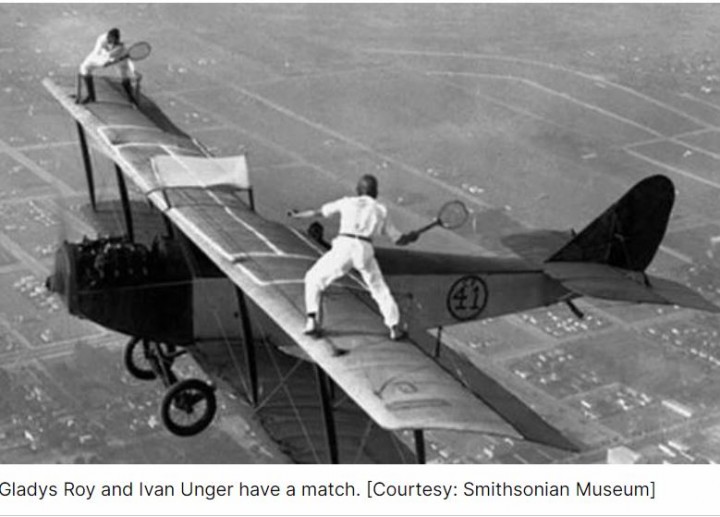 FAA suspends licenses of two pilots involved in failed Red Bull stunt
The pilots showed “careless or reckless manner so as to endanger the life or property of another” during the failed mid-air swap on April 24, over Arizona, the FAA said.

The Federal Aviation Administration revoked the licenses of two pilots for their "careless" and "reckless" conduct during a failed mid-air stunt last month in Arizona, officials said this week.

No one was injured on April 24 when daredevil pilots Luke Aikins and Andy Farrington tried jumping out of separate planes into the other crafts to land them.

“The FAA revoked the pilot certificates of the two pilots involved in the unauthorized Red Bull plane swap stunt on April 24, 2022, in Arizona,” according to the FAA statement.

“The attempted stunt resulted in the crash of one of the two single-engine Cessna 182 aircraft. The lead pilot requested an exemption for the stunt from the FAA, which the agency denied."

The pair had attempted to send their Cessna 182 planes into synchronized nosedives at 14,000 feet before jumping out to switch aircraft.

The planes were supposed to fall in tandem allowing Aikins and Farrington, who are also skydivers, the time to jump from their planes and into the other crafts in a stunt that Red Bull billed as a "world first" and which was livestreamed on Hulu.

But one of the planes spiraled out of control and crashed in Eloy, Arizona, leading only to Aikins getting in the other craft while Farrington was forced to parachute.

Both the FAA and the stunt's lead pilot, Aikins, said the attempt could have only gone forward with the agency granting an exemption.

But days after the failed stunt, Aikins admitted, in a statement posted on Instagram, that his request to the FAA had been denied — and he went ahead with it anyway.

The FAA denial came on April 22 and Aikins said he "made the personal decision to move forward with the plane swap."

"I regret not sharing this information with my team and those who supported me," Aikins continued. "I am now turning my attention to cooperatively working transparently with the regulatory authorities as we review the planning and execution."

In notices sent to the two pilots on Tuesday, informing them of emergency revocation of their licenses, the FAA told both airmen they were "careless or reckless manner so as to endanger the life or property of another" during the April 24 stunt.

The pilots could apply for reinstatement in one year.

Aikins, who was also fined $4,932, and a representative of Red Bull could not be immediately reached for comment on Thursday. It's unclear if Farrington was fined.

"Right now we're not available to comment on that, but hopefully we will be able to soon," Farrington told NBC News on Thursday.

Good.
'Yes, Madam, I am drunk, but in the morning I shall be sober and you will still be ugly.' Sir Winston Churchill.
Top
Post Reply
47 posts