Not sure if this is the correct thread.

I went to Helsinki today to see the USS Kearsarge, which was leaving harbour for exercises off the south coast (of Finland).

It has several MV-22B on it's deck and I was surprised by the size of the two propellors on the one "readied for flight".

The others were parked, with props folded, and it seems the wing can be rotated to be in line with the fuselage.

Thread corrected as I got the aircraft designation wrong.
Top

I believe that the marine version, like the Lady of Calcutta, has joints and hinges in the most unexpected places.
Top

After analyzing two emergency landings that occurred within six weeks this summer and were caused by the same problem, U.S. military officials have imposed new operating restrictions on the Bell Boeing V-22 Osprey tiltrotor fleet. 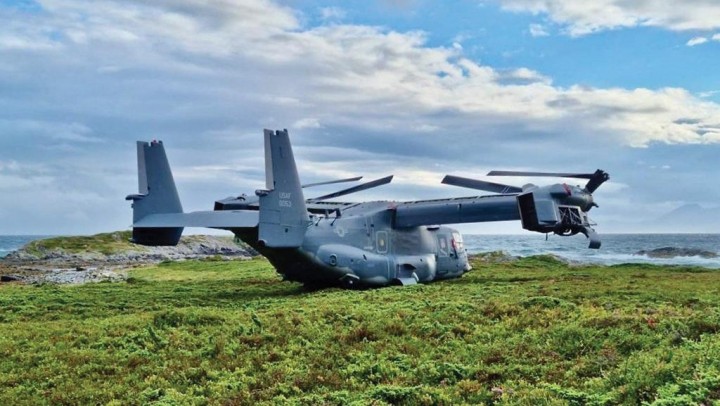 Air Force Special Operations Command (AFSOC) has also placed service-life limits on certain components as a stopgap solution to a long-simmering safety issue as a decade-old root-cause investigation continues. A CV-22 involved in one of the emergency landings remains stranded on an arctic island off the northern coast of Norway until a recovery plan is approved that complies with local environmental policies.

Lt. Gen. Jim Slife, the AFSOC commander, blames a slipping sprag clutch for both CV-22 emergency landings this summer as well as 13 more incidents across the V-22 fleet since 2010. Another MV-22 crashed in Norway in June, killing all four crewmembers, but a Marine Corps investigation determined the cause was pilot error.

The Marine Corps and Navy continued flying the MV-22 and CMV-22 fleets, but AFSOC grounded their CV-22s for 15 days until Sept. 2.

“My stand down was really an opportunity for us to bring some attention to this in the engineering enterprise and with our industry partners,” Slife said during a Sept. 7 event at the Air Force Association headquarters. “We may not understand why it’s happening, but we absolutely know what is happening. And so we need to take a closer look at what is happening and maybe remove some of the the precursor events.”

In nearly all cases, the sprag clutch—a device that allows the rotor blades to continue turning in autorotation mode—slipped during vertical takeoffs and during a common service life range for the gearbox, Slife says.

The Marine Corps has categorized the problem as a top design deficiency since 2008 but so far has not found a permanent fix, Lt. Gen. Michael Cederholm said at the Tailhook Association’s annual meeting on Sept. 8.

A slipping sprag clutch is not a problem unique to the V-22 fleet, but a feature of the tiltrotor’s twin-engine design aggravates the effect. The V-22 is designed with an integrated drivetrain and a common gearbox placed between the engines, ensuring that a single engine can drive both sets of propellers if one engine fails. But that built-in safety feature makes a sprag clutch slipping event more dangerous, Slife said.

“When a clutch slips, [the integrated drivetrain] causes the [power] load to transfer to the other engine and then when that clutch engages again, it brings that load back to the original motor,” Slife said. “When those large transient torque spikes happen, they exceed the limitations of the engines and the gearboxes.”

To the flight crew, the seesawing power shifts have to be managed carefully to avoid overcorrections that could lead to a more serious incident than an emergency landing, even as a “Christmas tree” of cautionary warnings light up the cockpit displays. So far, no crewmembers have been injured or killed in the 15 clutch-slipping incidents reporting during the last 12 years, but the potential remains for a serious mishap.

“I’m really, really proud of our crews and the way they’ve been able to safely land these airplanes, but I’d rather they not have to demonstrate their superior skill,” Slife said.

AFSOC has restricted CV-22 crews from performing a certain number of vertical takeoffs, advising them to use horizontal takeoffs whenever a runway is available, Slife said, adding that he feels “pretty comfortable” with the Osprey’s safety with the new restrictions in place.

The stranded CV-22 landed in early August on a Norwegian island nature preserve. AFSOC needs to replace the engines and gearbox to fly the aircraft off of the island, but local environmental protections for endangered salamanders and ferns are making that difficult, Slife said.

“These things never seem to happen at airfields. They always seem to happen at Norwegian nature preserves above the Arctic Circle at the onset of winter,” Slife said. “So it’s provided a really great technical problem for that unit to figure out what to do with that airplane.”

A long-term investigation continues to try to identify a root cause and permanent fix for the problem, which is the latest potential safety hazard for the Osprey to emerge over three decades of flight operations. The Marine Corps’ MV-22 fleet has averaged 3.27 Class A mishaps per 100,000 flight hours since fiscal 20210, nearly a third higher than the 2.38 rate over the same period for all of Marine Corps aviation. By contrast, AFSOC’s fleet of about 50 CV-22s averages six Class A mishaps per 100,000 flight hours.

The Marine Corps is studying a wide range of options for an MV-22 Next program, including a fleet replacement by the mid-2030s to implement a series of major reliability improvements, with a special focus on the engine and drivetrain.

I am surprised that a sprag clutch would cause so much head scratching. At its basis, and simplest, it is the clutch on one's childhood bicycle that allowed the back wheel to free wheel without turning the pedals. A slipping sprag is a serious issue. I can't imagine how they allow these aircraft to continue to fly with such a deferred defect.

I appreciate that the gearbox and clutch setup in the Osprey is complex given that it has to allow both props/rotors to "freewheel" in the case of an autorotation.
“One wondering thought pollutes the day.” - Mary Shelley
Top

I have always viewed the Osprey (aircraft) and its tiltrotor ilk as being of the same genus as the more complex creations of Heath Robinson.

The Chinook stretches the boundaries of engineering complexity IMO, though it seems to get away with it (in the main).
Top

Not an Osprey but from personal experience a sprag clutch failure in a Bell 47J2 at the wrong height and airspeed can result in a very sore back due to the immediate and unexpected encounter with terra firma! I snapped both tail rotor pedals with my feet. 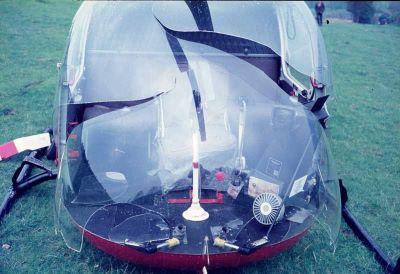 CharlieOneSix wrote: ↑
Tue Sep 13, 2022 3:21 pm
Not an Osprey but from personal experience a sprag clutch failure in a Bell 47J2 at the wrong height and airspeed can result in a very sore back due to the immediate and unexpected encounter with terra firma!
LR-Accident-4-May-1971-2.jpg

Wow, that looks like some impact C16, I am glad that you walked away with no long term back problems. Did the aircraft fly again?
“One wondering thought pollutes the day.” - Mary Shelley
Top 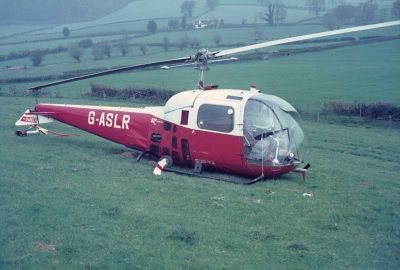 It was sold after this accident in 1971 to the long defunct Twyford Moors Helicopters who got it airworthy and sold it on. It was again written off at Bristol Lulsgate in 1996. Now non-airworthy, it was photographed in 2015 at the Santa Cruz shopping centre in Tenerife - with a bit of wood as a tail rotor - to advertise a car wash business! 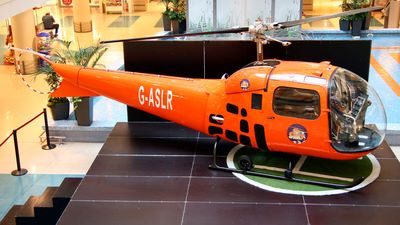 I trust the OP forgives this slight deviation from Osprey's just for a moment. Thank you for that, interesting real world insight, as ever with your enjoyable posts, into the implications of a failing sprag clutch.

I found another colourful image of your old mount here C16. 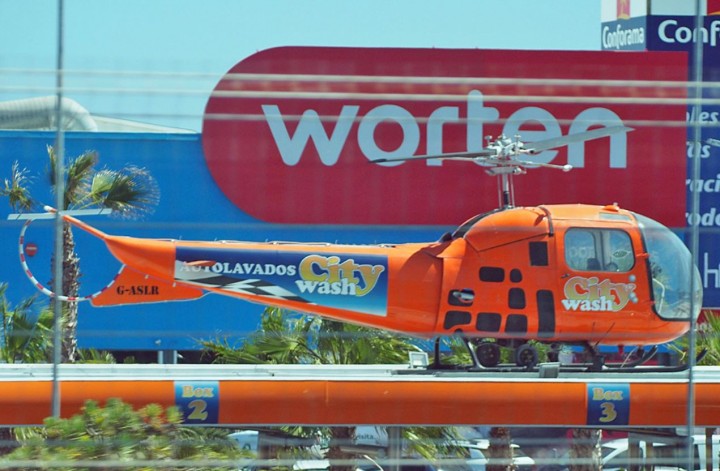 It seems (from the video) that the workaround for this serious potential failure in the V-22 is for the crew to ensure they use the minimum possible power for lift off and effectively wait outside of the avoid curve for any indication of a sprag clutch failure or not. Seat of the pants stuff really and not good enough in the long tem methinks, when a technical/engineering fix is required.
“One wondering thought pollutes the day.” - Mary Shelley
Top

The interim suggestion in that video on how to operate the Osprey is really quite restricting. The video emphasises the take off profile with reduced power but it also must put a restriction on the type's operational role as presumably with high AUW's with a bunch of troops in the back the sprag problem could also occur at high power as a hover is reached. Not good for morale!

+ my apologies to the OP for my earlier deviation from the Osprey subject.
The helicopter pilots' mantra: If it hasn't gone wrong then it's just about to...
https://www.glenbervie-weather.org
Top

I wonder why they can't sling the Osprey off the island with a CH-53E.

A bit close to limits but doable?

I saw an Osprey with the rotors up when I was kayaking last week. Then it occurred to me that there's a naval base just south of the airport in San Diego and it was probably going there. It did appear to be flying directly over the main airport though, I guess there's probably a minimum height for such things to guarantee it won't interfere with a go-around.
Top
Post Reply
14 posts • Page 1 of 1