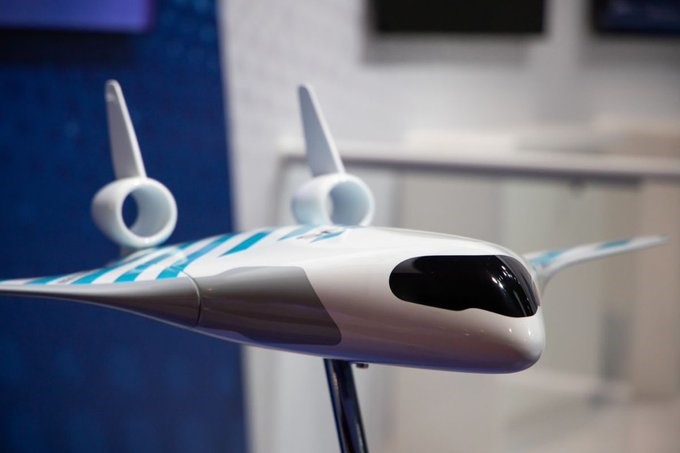 is indeed 'futuristic', but leaves me wondering what the airflow into the engines will be like at high alpha!
Top

Nothing special. Seen it before, just a VC10 engines stuck on the back of a Vulcan.

Boac wrote: ↑
Tue Feb 11, 2020 10:06 am
The AB blended wing project is indeed 'futuristic', but leaves me wondering what the airflow into the engines will be like at high alpha!

Double flame outs or surging seem possible with turbo fans, caused by the possible blanketing by the body/blended wing at high AoA, although I assume the design keeps the air flow laminar and thus reduces the kind of turbulent air that would make this happen within a normal/reasonable Alpha range. The concept as envisaged here uses ducted fans which could potentially be swiveled to help partially obviate this problem.


MAVERIC has two ducted fans mounted within its twin vertical stablisers, a stand-in for turbofans, but Airbus says it is considering other propulsion systems. The company believes it could eventually merge distributed hybrid propulsion technology being developed on its EcoPulse demonstrator with its flying-wing effort.

The model certainly flies rather well.

Airbus Blended Wing - Flight Global
For what is it to die, but to stand in the sun and melt into the wind?
--Kahlil Gibran
Top 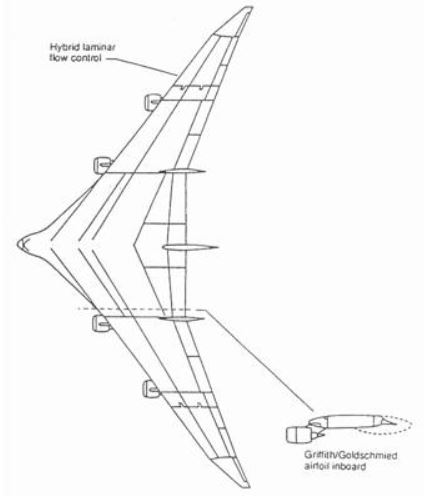 griffith goldschmied airfoil
For what is it to die, but to stand in the sun and melt into the wind?
--Kahlil Gibran
Top


Daher – manufacturer of the TBM – Airbus and Safran have announced a collaborative partnership for the design and development of the wing-mounted EcoPulse distributed hybrid propulsion demonstrator with a first flight scheduled for 2022.

There are three areas of research and development:

The distributed hybrid propulsion system will be provided by Safran

* Airbus will have responsibility for the aerodynamic optimisation of the distributed propulsion system, the installation of high energy density batteries and the use of those batteries to power the aircraft

* Component and systems installation, flight testing, overall analysis and regulatory construction will be undertaken by Daher using its TBM platform.

The worrying thing about this design is no pax windows. You would not get me in that. Probably planning on screens and cameras. Still not going on it.
'Yes, Madam, I am drunk, but in the morning I shall be sober and you will still be ugly.' Sir Winston Churchill.
Top

Inside view in the video appeared to show windows. I expect I'll be past it before a design like that could get into production, so I'm not bothered anyway.
Sent from my tatty old Windoze PC.
Top

I remain to be convinced. The idea of a blended wing is excellent and proven - it is the airflow into the motors at high alpha of which I am unconvinced. This body shape produces intense vortices at high angles which is where much of the lift comes from.

As uni says, I probably will not be 'bothered' by it!
Top

Some of you chaps need to move on with the times...

The maths says the aircraft will fly. It will fly and engines won't be unnecessarily compromised by the design. They will put some windows into it so you can grumble splenetically over your drinks while glaring out.

They told Jack Northrop that the flying wing wouldn't fly but it did and now thanks to fly by wire they fly safely.

My gosh all this nay saying is enough to make a man post a METAR!

TheGreenGoblin wrote: ↑
Wed Feb 12, 2020 8:51 am
They told Jack Northrop that the flying wing wouldn't fly but it did and now thanks to fly by wire they fly safely.

Didn't the Wright Bros use fly by wire?
Wine improves with age
I improve with wine

TheGreenGoblin wrote: ↑
Wed Feb 12, 2020 8:51 am
They told Jack Northrop that the flying wing wouldn't fly but it did and now thanks to fly by wire they fly safely.

Didn't the Wright Bros use fly by wire?

tgg with tongue in cheek? wrote:engines won't be unnecessarily compromised by the design

- when you have time, the next winning lottery ticket number please?

tgg with tongue in cheek? wrote:engines won't be unnecessarily compromised by the design

- when you have time, the next winning lottery ticket number please?

Joshing aside, I fully agree that the stability of the airflow into the engines is an issue that needs to be carefully managed. It is a very interesting subject.

There are some fascinating studies on this out there highlighting the pro's and con's of the various possible configurations.


There are several differences in the design of an efficient propulsion system for a tube and wing aircraft and a BWB. For example, engine location and count are among these differences. The most common location of the engines on a tube and wing aircraft is under each wing. For a BWB, many conceptual designs utilize a set of aft mounted engines on pylons, or integrated into the wing (for example: Liebeck, 2004; Nickol & McCullers, 2009; Potsdam et al., 1997; Roman et al., 2000). The traditional under wing method greatly increases drag of the BWB by negatively altering the lift distribution. Dommelen & Vos (2012) conducted a comparison between wing-mounted and aft-mounted designs. The study found that the aft mounted design had a significantly greater average and maximum lift to drag ratio-more than 10%-mainly due to decreased drag of this design. The study finds that the aft mounted BWB has lower lift coefficients with flaps down (leading to longer takeoff/landing runways) and a center of gravity farther back on the fuselage; this leads to a greater static margin and low stability. With the apparent tradeoff, this study considers a detailed analysis of different engine placements.

Hanlon (2012) and Ko, Leifsson, Mason, Schetz, Grossman, and Haftka (2003) conducted a detailed analysis of a new idea in BWB propulsion called Boundary Layer Ingestion (BLI). BLI uses embedded propulsion to fill in the wake of the aircraft, increasing propulsive efficiency through the intake of air on the trailing edge of the aircraft. As a result, the engine reenergizes the part of the wake that normally travels at a lower velocity.

I am sure that this post will have everybody here grinding through the relevant Navier Stokes calculations...

This study focuses on the engine, lift body aerodynamic interaction on a putative BWB...

The engine/airframe interaction effects of the BWB300 on aerodynamic performances were analyzed by using the numerical simulation method. The BWB300 is a 300-seat Blended Wing Body airplane designed by the Airplane Concept Design Institute of Northwestern Polytechnical University. The engine model used for simulation was simplified as a powered nacelle. The results indicated the following: at high speed, although the engine/airframe interaction effects on the aerodynamic forces were not significant, the airframe’s upper surface flow was greatly changed; at low speed, the airframe’s aerodynamic forces (of the airplane with/without the engine) were greatly different, especially at high attack angles, i.e., the effect of the engine suction caused the engine configuration aerodynamic forces of the airframe to be bigger than those without the engine; and the engine’s installation resulting in the different development of flow separation at the airframe’s upper surface caused greater obvious differences between the 2 configurations at high angles and low speed. Moreover, at low-speed high attack angles, the separated flow from the blended area caused serious distortion at the fan inlet of the engine.

For those who, like me, find the whole BWB concept fascinating and believe that we will see passenger aircraft like this flying before we shuffle off this mortal coil, this trenchant and prescient commentary back in 2000 by Al Bowers, a Senior Aerodynamicist for NASA at the Dryden Flight Research Centre, makes for very interesting reading...


One of the first things you notice on this design is the engines having been raised out of the boundary layer flow. This was the fastest and easiest way to solve the inlet and compressor problems trying to deal with the turbulent flow off the rear of the wing, especially in high angle of attack flight. Since this was going to be one of the hardest problems to solve and may not have been economically feasible, the simpler approach was taken.

He also notices the no windows "issue" (ask Charles Lindbergh about his periscope) and he just suggests triple gins for those recalcitrant passengers who won't accept LCD's... 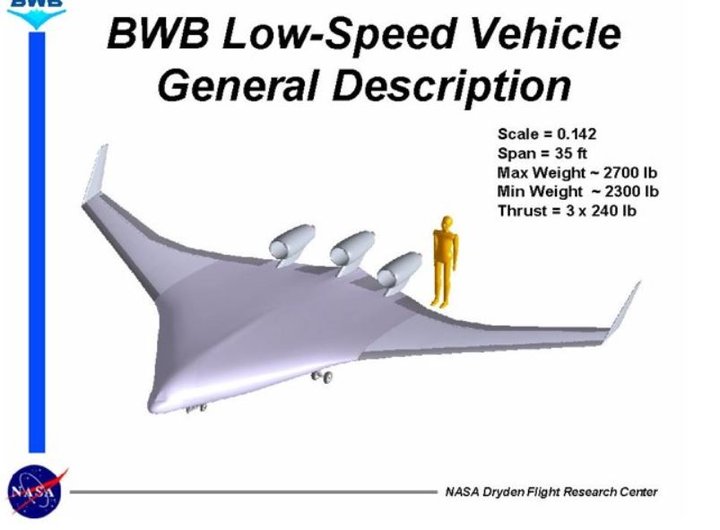 This talk of using a lot of small engines amuses me, given the big push to drop 3- and 4-engine aircraft in favour of twins. In isolation, I would expect one humongous engine to be more efficient than a bunch of smaller ones, but I guess when the overall system aerodynamics are taken into considerations, possibly not.
Top

GG’s post # 9 has me very concerned. I cannot recall doing anything “splenetically”, ever, let alone over my aIrborne drinks?

Is this behaviour, whatever it is, a function of this new improved radical ‘bus design?

All this chat on other threads regarding software corruption fails to solve my problem with crossed fingers as I board any Airbus of any vintage. It impedes my attempts to lift my cabin baggage into the o’head locker and to fasten the seatbelt etc.......