Japanese architect Hajime Narukawa claims to have tackled a centuries-old problem - how to draw an oblate spheroid Earth on a flat plane.

He claims the above map, called the AuthaGraph World Map, achieves this task.

The projection, first created in 1999, frames the world's physical components in a 2D rectangle, attempting to represent their relative sizes as accurately as possible.

It does so by dividing the world into 96 triangles, making it a tetrahedron, then unfolding it to become a rectangle.

Unlike the traditional Mercator map, made in the 16th century, which overstates the size of northern areas like Greenland and minimizes that of central areas like Africa, the AuthaGraph World Map retains parity of area to a 3D projection.

The projection recently won the 2016 good design grand award in Japan, an awards evening founded in 1957 by the Japanese ministry of international trade and industry.

I don't get this. Any fule kno the earth is flat so it can be represented without distortion on a flat surface.
"Religion is the advertising campaign for something that doesn't exist."
The late Clive James
Top

Can't be doing with that - GREAT Britain is reduced to a tiny smudge - and what's more it isn't in a forefront prominent position.
Top

Gall-Peters projection, better than Mercator size wise anyway but not as a navigational tool for sailors ref. bearing, e.g. so that any straight line you draw on a Mercator map will follow a line of constant bearing and can therefore be navigated with a compass or other means of determining bearing. AuthaGraph would also be pretty useless for navigation. Mercator rules Ok!


Gerardus Mercator, a renowned Flemish cartographer, devised his map in 1569 to aid navigation along colonial trade routes by drawing straight lines across the oceans. An exaggeration of the whole northern hemisphere, his depiction made North America and Europe bigger than South America and Africa. He also placed western Europe in the middle of his map.

Mercator’s distortions affect continents as well as nations. For example, South America is made to look about the same size as Europe, when in fact it is almost twice as large, and Greenland looks roughly the size of Africa when it is actually about 14 times smaller. Alaska looks bigger than Mexico and Germany is often right in the middle of the picture, not to the north – because publishers frequently cropped off Antarctica and then re-centered the Mercator map, resulting in the equator appearing two-thirds of the way down the image.

Three days ago, Boston’s public schools began phasing in the lesser-known Peters projection, which cuts the US, Britain and the rest of Europe down to size. Teachers put contrasting maps of the world side by side and let the students study them.

I mean does apparent size matter at all!

How on Earth (pun) did cartographers like Mercator have the knowledge to conceive a World map?
Top

The original Mercator Map... a lot of terra nova and terra incognita there... 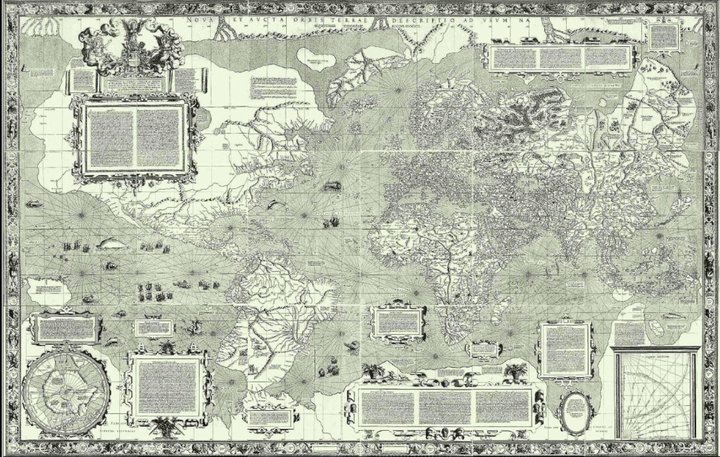 The original Mercator Map... a lot of terra nova and terra incognita there...

We call that Scotland today...

Especially as they hadn't solved their problem of latitude.

Indeed the whole astronomical universe was better understood by more people then* than today.

*Then being back into the midst of time.
Top

It's all very well, tgg, but how on earth do you get that tetrahedron into your flying suit pocket when you are off for a low-level wazz?
Top

Not much good for that I admit Boac, but a tessellation of maps is able to depict a satellite’s long term movement around the earth in a continuous line, so useful in that sense... 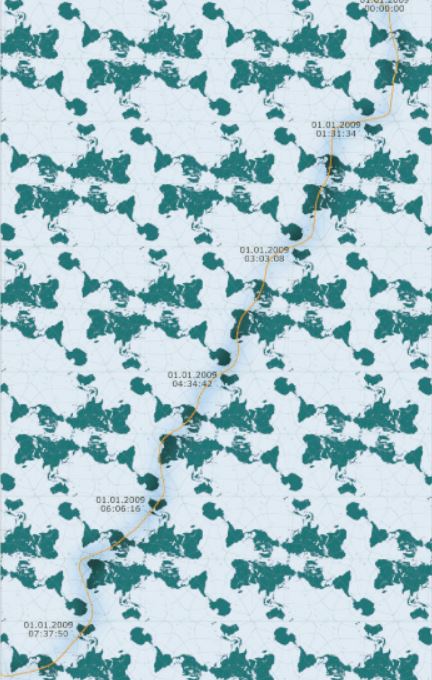 The ideal projection is of course dependent on your system of navigation. With a modern digital system the Lamberts works with straight lines actually being curves whereas it was a PITA for manual systems and constant course corrections. Radio aid bearings were also extra work.
Top

For those (nerds) like me that find projections interesting I recommend this NASA Java tool...


G.Projector transforms an input map image into any of about 200 global and regional map projections. Longitude-latitude gridlines and continental outlines may be drawn on the map, and the resulting image may be saved to disk in GIF, JPEG, PDF, PNG, PS or TIFF form.

Available for Windows, Mac and Linux.

This fun tool (see below) allows analysis of the distortion of size due to Mercator projections...

e.g. UK vis a vis Botswana... The blue shape is the UK, the brown shape is China and India is Yellow... 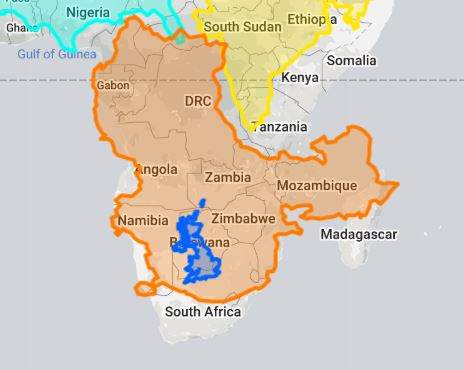 Here's a gif that contrasts the size of Australia with other regions..