I have watched the evolution of this technology and this company for some time now, and while I am intrigued, I doubt that the apparatus can be scaled up to deliver a useful payload into Low Earth Orbit simply due to the enormous stresses on both the launchers and the payload, not to mention the likely destruction of the launcher due to catastrophic instability at the moment of payload release by the unbalanced longer release arm needed for higher and longer trajectories required for LEO insertion. 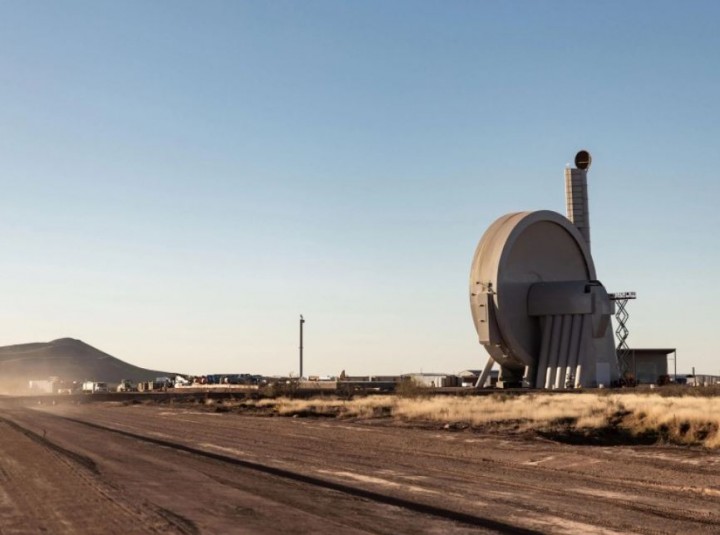 Will physics prevent SpinLaunch from succeeding?


I can calculate the motions of the heavenly bodies, but not the madness of people - Newton
Top

Almost as bad as doing this kind of thing I would think...

Mind you, you ejector seat-pulled types of fellows were basically cannon balls anyway!

From the Big Think-


Problem #1: Can the payload survive spin-up?

This is not a trivial problem. Whenever you accelerate an object to move in a circle, it experiences not only the “spin-up” force that causes its angular speed to increase, but also a centripetal force — a force toward the center of the circle — that prevents the object from either crashing into the side of the accelerator or from flying off in a straight line prematurely. That centripetal force is dependent on three factors:
At its full-scale size and with a desired exit speed of 5,000 mph (8,100 kph), that translates into a peak centripetal acceleration, just before the payload is launched, of somewhere between 50,000 and 100,000 gs, where one g is the acceleration due to gravity at Earth’s surface. The payload must ramp up to this peak acceleration over long periods of time — something like ~30 minutes — and survive it with all systems intact, including the on-board rocket system, in order to reach orbit. This represents a peak acceleration that’s eight times what the current prototype experiences.

Such conditions have never been met to date; this is a tremendous obstacle to be overcome.

It’s always preferable to build upon already-existing technologies than it is to have to invent something entirely new, and yet the latter is very much what’s in store for a SpinLaunch payload. The reason is simple: if you have a liquid-based fuel on board, you need a plumbing system to contain and control it; this is exactly the type of system that will not survive the spin-up accelerations that SpinLaunch requires.

This means that solid rocket fuel will need to be used instead: something with the hardness and durability of something like formica. In principle, this can be done, but it represents a substantial obstacle toward reaching space.

While solid-propellant rockets offer a number of advantages over liquid-propellant ones, those advantages include stability, durability, and reliability. Unfortunately, however, they have lowered efficiencies and are less controllable than liquid propellant alternatives, which is why solid-fuel rockets are primarily used in military armaments but liquid-fuel rockets are typically used for spaceflight. Even if this difficulty can be overcome, the limitations of solid-fuel applications will inherently limit the mass of the payloads that can be delivered with SpinLaunch.

Do you remember the unfortunate and tragic Space Shuttle Columbia disaster? When Columbia attempted atmospheric re-entry, the spacecraft catastrophically broke apart, killing all astronauts on board. The reason the shuttle disintegrated in the atmosphere, however, was simply a small, lightweight piece of foam insulation that struck a portion of the craft at very high speeds. That’s a key concept in physics: the amount of kinetic energy that something possesses — and hence, the amount of damage it can cause in a collision — is proportional to its mass, but proportional to its speed squared.

Can the launch vehicle/payload survive this set of conditions and remain fully operational and undamaged? It’s possible, but it’s never been done before. Again, this is an unprecedented obstacle that must be overcome.

Problem #4: The atmospheric drag force experienced by the payload will be tremendous.

If you hold your hand out of a car window when you’re traveling at 100 kph (62 mph), how much of a drag force will it experience relative to traveling at half that speed: 50 kph (31 mph)? The answer isn’t twice as much force, as one might expect, but rather four times as much force. The drag force you experience is proportional to the cross-sectional area of the object (your hand, in this case) but also to the velocity you’re moving at squared.

Normally, rockets start out moving slowly near Earth’s surface — where the atmosphere is thickest — and pick up speed as they continue accelerating up through the atmosphere. The highest speeds are achieved at the highest altitudes: where the air is thinnest.

Not so with SpinLaunch; in fact, the reverse is true. The payload will be moving at its fastest where the atmosphere is the thickest, which maximizes speed and energy losses due to drag. This will also heat up the payload substantially, and in ways that no payload that’s ever made it to space before has experienced. The biggest problem with Project HARP, back when it was being run, is that there was no payload that could be launched that would be capable, at its high altitude, of taking it the rest of the way to space. Can SpinLaunch overcome that problem? It remains to be demonstrated.

Although it’s a brilliant idea to try and cut out the first stage of a rocket, which after all is where the greatest fuel expenditures come from, SpinLaunch’s goals are impressive. With a launch speed of 5,000 mph (8,100 kph), it will certainly reach high altitudes on its own.

But why pioneer a technology that requires a large amount of expense, infrastructure, and moving parts — as well as requiring your payload to endure tens of thousands of gs for tens of minutes — when you can just scale up what we’ve already learned from Project HARP?

In the 1990s, Dr. John Hunter led what was known as Super HARP, which was a methane-and-hydrogen powered ballistic launch system that achieved exit velocities of 6,700 mph (10,800 kph). Rival startup Green Launch asserts that laboratory-based hydrogen systems have achieved exit velocities of 25,000 mph (39,600 kph) and that a full-scale projectile speed of 9,000 mph (14,400 kph) is accessible. In fact, a December 2021 test achieved exit velocities of 4,400 mph (7,200 kph): nearly matching SpinLaunch’s desired full-scale goals. While SpinLaunch will require at least two extra stages to reach space, Green Launch aims to reach the Kármán line that defines the start of space, 100 kilometers (62 miles) up, from the projectile launch alone.


There’s no doubt that there’s a lot of truth to the old saying that “fortune favors the bold,” and SpinLaunch is certainly a bold idea. However, the laws of physics pose numerous obstacles for those who would build high-powered, rapidly moving large-scale apparatuses with moving parts. In the 1990s, the Department of Energy attempted to build enormous centrifuges for accelerating large objects, but they always began to break down at speeds of ~3,100 mph (5,000 kph): about 60% of the speeds that SpinLaunch aims to achieve. The challenges before the team aiming to reach their stated goals are enormous.

That isn’t to say that SpinLaunch is impossible or that its concepts violate the laws of physics; they do not. However, there’s a very big distinction between what’s physically possible and what’s physically practical. It’s not clear that, with three times the diameter of the current prototype, the desired launch parameters can be met. Even if they are, it remains to be seen if the later-stages required to take the launched payloads to orbit can operate after experiencing the extreme SpinLaunch spin-up and launch and drag conditions. It’s important to explore a variety of options in the quest to reach space, but scaling up a prototype is rarely as easy as one might initially think.

Makes me dizzy just thinking about it all.
Top

One of the more basic problems in designing a spacecraft is the conflicting requirement of making something to work in a low gravity environment (fragile) but also to stand the forces encountered during launch (robust). This includes deployment of antennae, solar panels, sun shades, mirrors, ejectable instrument covers, mechanical de-spin devices. A lot of very lightweight and delicate devices which are then strengthened just enough to stand launch g and vibrations caused by uneven motor burning. Just enough, because added weight means more fuel in the launcher, which means a bigger launch vehicle which means more power from the motors... Spin launch? No way..
Top

An amusing solution to a classic problem was how do you de-spin a spacecraft which has been ejected from a rotating final stage? Basically it consists of two lengths of cord with a loop on one end and a weight on the other, and two hooks spaced 180° apart on the outside of the spacecraft. You wind the cords around the spacecraft and fasten the weights with a pyrotech device to the spacecraft. Once in orbit the device operates and the released weights unwind transferring the energy of rotation from the spacecraft to the weights. The cords slip off the hooks and the weights, trailing their cords, disappear in opposite directions from the now-stationary spacecraft.
Top

Just like a ballet dancer doing a piroette(sp?).
Top

I have this picture in my mind of some alien creature on some alien planet millions of years in the future being hit on the head by a weight trailing a cord with a loop in the end.
Top
Post Reply
10 posts • Page 1 of 1