When, where and in what was yours? Mine was 1956 in an Auster at the long gone Christchurch airfield when Dad stomped up ten bob: 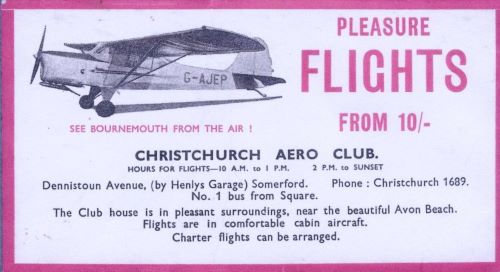 With my dad as pilot, also in an Auster, from the long gone Panshanger airfield in 1964, aged 2.
Top

Age 5 or 6 circa 1960 in a V-Tail Bonanza.
I was visiting relatives about 2 1/2 hours away by road when a family emergency came up (don't remember what) and my parents flew up in the company plane of the spinning mill that my father worked for.
My father was in sales and often was flown around to client knitting mills all over the U.S. southeast.
They also had a Beech Travel Air that they used for longer trips to New York or Chicago.
I was happy to be able to tell my Dad that I got my ATP and MEI in a Travel Air.

Late 60s, from East Midlands to Southend. The flight was a birthday present from a friend of the family. I don't remember anything about aircraft type apart from the fact that it had propellers.
Top

When all else fails, read the instructions.
Top

Aged just under 4 when my Dad came home from from Aden: 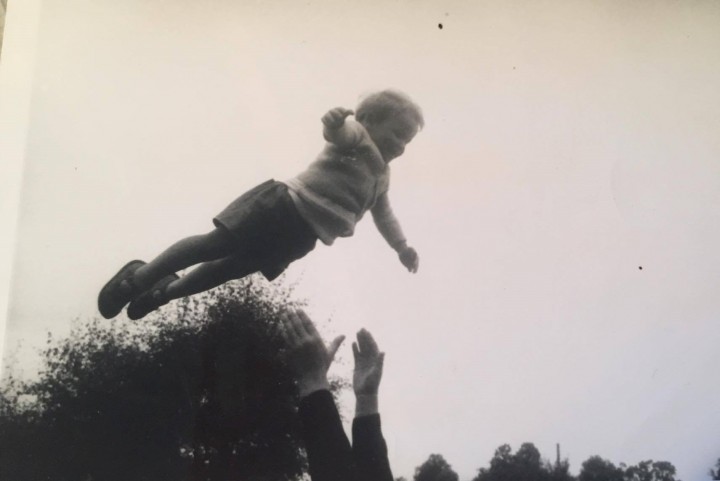 Although I had flown right after being born, I believe I was flown from Accra to Takoradi.

October 1962 - There is a photo of me lying on a tray in the galley on a SAA Viscount, en route from Johannesburg to Cape Town, surrounded by two cooing, attractive air hostesses (as they were known then) and a proud beaming mother who had worked with these young colleagues before I had arrived to ruin her peripatetic, fun, life in the air.

Little did I realise at the time that this was, literally, the high point of my life, having two young women (and my mother, of course) showing such rapt interest in me, and that it could only go downhill thereafter!

I have the photo in the loft. I might retrieve it and post it here as a salient lesson to my aged self.
“One wondering thought pollutes the day.” - Mary Shelley
Top

Ah, Panshanger! When (as a family) we were forcibly moved to the South of England, we lived in Panshanger. (1986-1988). I used to love walking to the fence with my little lad and watching the Tiger Moths and other heavier-than-air types aviating - fond memories!
Top

I was standing by the fence at Speke Airport watching the comings and goings, and there was a Dragon Rapide getting ready to do a few circuits. The pilot asked me if I wanted to join the (lady) air cadets. We were airborne for about 15 minutes and flew down the river. Fabulous views. I think I was about 14 at the time, and I decided (foolishly!) that aviation was to be my chosen career

Aged just under 4 when my Dad came home from from Aden:

Ah, Aden! Aged 4
When my family emigrated to Australia in 1966, the boat stopped at Aden (almost nobody emigrated by airliner in those days)
We had the address of a civilian friend working for the military, who had insisted we visit. He held the equivalent of a senior officer's rank.
After some negotiation on the dockside, a phone was accessed, and an afternoon arranged.
We couldn't go to the Officers' Mess as it had just been mortar-bombed, so it was the beach.
An army Land Rover turned up at the dock. I had to sit in the front to balance the armed soldier standing on my side, with my parents and baby brother in the back.
It was, as you can imagine, quite exciting!

My first flight (I think). 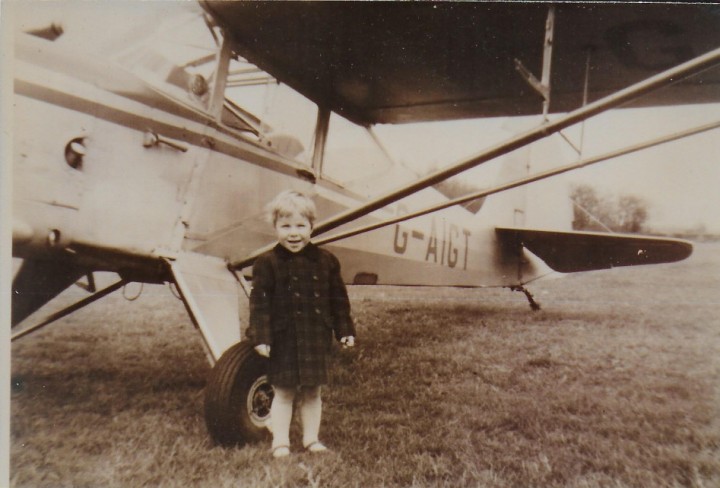 I guess about 1967 aged 12. A jet from Manchester to Paris no idea what. A Manchester cathedral choir tour of frog land. A lot of trains involved. No problems in buying beer on board. The loos were just a hole down to the track so we dropped the bottles down there so that our minders didn't know. We had to stay with families which I found embarrassing but they had no hesitation in giving us wine with dinner.
'Yes, Madam, I am drunk, but in the morning I shall be sober and you will still be ugly.' Sir Winston Churchill.
Top

A Dragon Rapide I is told, no memory of it at all, about four a round Ringway flight with Airviews?
Think the old man wanted to do it really and wanted an excuse.
Top

I was 10 and it was a mystery flight on a F27 operated by EastWest. We flew to Wagga Wagga.
Next trip, a few months later on Singapore Airlines B747 Sydney to Singapore.
I did a joy flight in a glider in my early twenties. Nup. Sick as a dog.
A colleague at work took me for a flight in his PA28 when I was 21. That hooked me forever.
Top

OK, before my time then.
Top

For me; No flamin' idea!! It was Family rumour that I was aged about 6 months and in my Mother's arms when we went for a quick flight in a two seat Glider with my Father flying it.

But it was never confirmed that such a thing ever happened and it never occurred to me to ask either Mum or Dad.

First flight - a Chippie, and not the ones that come with fish. 1957 at RAF Chivenor. Magic it was, pure magic. Equally enjoyable was flight was from Gatwick to Bahrain in 1965. Yes a magic Ten, of the VC variety. A troopship, the jockey pulled back hard on the stick, and gave it stick, and we all cheered and drummed our feet.
Rev Mother Bene Gesserit.