Three videos - the first of a S76 helicopter night landing on a rig off Brazil. The video starts very close to the rig so you don't get anything like the full effect but it shows the potential for errors.

The second video is of a helicopter night landing at a camp in the artic. Combined with the black hole approach he has the disorientating effect of snow in his landing light beam.

The third video is of a US Navy aircraft landing on an aircraft carrier at night. If that doesn't put the wind up you nothing will! Just listen to the pilot's rate of breathing and that's before he has an electrical failure at two miles finals! Bet you were surprised when you saw where the centre line of the deck was!

A worse approach - in my opinion of course - is one where the black hole is combined with lights of a settlement or industrial site several miles in the background. The Churchill Falls Corp lost a HS25 at Churchill Falls in Western Labrador because of that. Light snow was falling and they were landing on R13, and they flew the airplane into the the ground on final approach. The airport is located a few miles northwest of the townsite, such that on approach to 13 the lights of town make it appear that you are too high. That is what happened to them. The airplane struck the ground well short of the approach lights and broke apart. By the time a search party was organized, the light snow had turned into a blizzard, and the one pax who had survived the crash had frozen to death.

My first approach in a B-747 to Male, Maldives, was at night, VOR/DME Arc on to two parallel lines of lights, no terminal lights - just a strip of concrete in the ocean.

After landing I remarked that I didn't like that one bit, and a quiet voice from the jump seat - new hire on a familiarisation trip, said ... Now you know what it's like landing on a carrier at night. An ex- naval aviator.
Top

Naval aviators and carrier pilots in particular seem to be to be a special bunch of pilots. I watched that carrier approach video posted by C16 above and found my cortisol levels going up and actual feel stressed just watching it.

All this talk of black holes and pitch blacks nights reminded me of this story related by astronaut Jim Lovell...


By 1953 Lovell was dispatched to Moffett Field in California and assigned to Composite Squadron Three, an aircraft carrier group. Six months later he made his first nighttime carrier landing, off the coast of Japan. Lovell recalled in 1999 his response to the assignment: “I told the skipper, ‘You know, I’m having a little trouble flying in the daytime yet, and you want me to go out at night?’ ” Flying a F2H Banshee, Lovell searched for the USS Shangri-La. It was slightly more challenging than he’d expected: He was using a light he’d invented to illuminate his knee board, and it accidentally short-circuited his instrument panel, so Lovell had to locate the carrier by the trails of phosphorescent algae churned up in the carrier’s wake. A master of understatement, Lovell would recall the event years later: “It was a great experience, and I learned an awful lot.” (The memory became a famous scene in Apollo 13. In the film, Tom Hanks recalls the fear of not being able to find the carrier in all that blackness, a foreshadowing of the possibility of not making it home to Earth.)

Lovell would eventually make 107 carrier landings, and go on to teach plebes how to fly the FJ-4 Fury, the F8U Crusader, and the F3H Demon. Then he headed to the naval base at Patuxent River, Maryland, to become a test pilot. His experience as a naval aviator and test pilot got him into NASA’s second group of astronaut trainees—for the Gemini missions—in 1962. (A minor medical condition kept him from being one of the original Mercury 7.) Over the next 11 years he would spend a total of 715 hours in space, a record not surpassed until Skylab.

It is said that some of the pilots based around the Scottish islands can navigate by looking at the wave patterns around the islands but that is another story altogether.

My first approach in a B-747 to Male, Maldives, was at night, VOR/DME Arc on to two parallel lines of lights, no terminal lights - just a strip of concrete in the ocean.

That would keep the mind wonderfully focused on the task at hand, wouldn't it?

CFL Co was decidedly unlucky with their flight department. Five years prior they lost all their top management at Wabush in Western Labrador when their first 125 crashed into the face of an open pit iron ore mine. The approach chart for Runway 01 at Wabush is depicted below. (I had to rotate it on it's side because image of height restrictions.) Back then the FA beacon was known as the Whiskey Zulu beacon, same frequency, ident WZ. The aircraft was cleared for the NDB approach to R01 via the WZ beacon. The crew tuned and obviously didn't identify the Whiskey Kilo beacon and carried out the R01 approach on that navaid. The mine is located about five sm north of the airport. As the accident report stated "...Destruction was instantaneous and catastrophic."

After landing I remarked that I didn't like that one bit, and a quiet voice from the jump seat - new hire on a familiarisation trip, said ... Now you know what it's like landing on a carrier at night. An ex- naval aviator.

Male was always a black holer at night. 9000ft runway IIRC which made for a carrier landing above 250T LW. Tight turns at the ends for the backtrack. Only went there during my SQ days 1989-90.

Used to love the hooning speedboat ride to Bandos or Karumba depending if we were inb or outb to Europe. Some of the guys used to let me take the helm!
Top

RAF Leuchars could be a Black Hole problem.
I also recall the disorienting effect of snow, and sometimes heavy rain, with night landings. Mist, especially very thin stuff creeping up in the wee hours off a river (as was common at Leeming), was another factor.
I was lucky enough to fly with some ex-WW2 pilots whilst on the UAS, who taught me several things not now common. One involved assessing whether one might be better off using just the runway lights, but no landing light, or vice versa, rather than automatically using both. We tried all the combinations, and there were definite advantages to not using one or the other in certain conditions.
Personally I always construct the visual equivalent of an instrument approach, with check cues of distance to go, height, and rate of descent, when doing night visual landings.
Top

The rig landing brings back a few memories CharlieOneSix! There were some tiny gas platforms in the Southern North Sea which were a real challenge at night, like this ARCO platform, which was only just big enough for an S76: 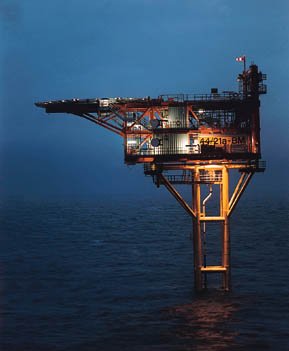 BCal Helicopters sent us over to Fort Worth to learn about the Bell 214ST and one of the other people on the course was Randy, from Barrow, Alaska, SAR who was about the size of Chewbacca. He told me about a night approach like the Arctic one you posted, which ended badly for him. They were tasked with picking up a woman in labour from a remote settlement and could see the landing site from miles out, but accidentally allowed the height to bleed off until they contacted the snowy, very flat ground, when the aircraft 'rolled itself into a ball'. They decided to buy something a bit more robust with whistles and bells and chose the 214ST.

Randy took us off to watch drag racing on the day off in the middle of the course, where we watched the famous Don Garlitz, followed by a concert by the Guess Who? in the evening. Great course and great people in Texas.
Top
Post Reply
8 posts • Page 1 of 1