Nearly 2,000 people responded to the invitation on Facebook stating that they would be attending or potentially attending
By Simon Johnson, Scottish Political Editor 23 December 2021 • 7:45pm
Nicola Sturgeon
Nicola Sturgeon cancelled traditional Hogmanay events earlier this week due to the rapid spread of the omicron Covid variant Credit: Fraser Bremner/Getty Images

Police have charged a man after an advert inviting revellers to a Hogmanay party at Nicola Sturgeon's house was posted on Facebook.

Nearly 2,000 people responded to the advert, which used Ms Sturgeon's real address, stating they would be attending or potentially attending.

A Facebook event page was created titled “NYE street party @ Sturgeon's house”, which claimed it would be “bringing the celebrations to Sturgeon's”.

The header photo for the party event showed the First Minister grinning widely as she sat on a park swing.

Ms Sturgeon's sister Gillian, 46, said she had reported the prank to the police after more than 700 people indicated online they would attend and more than 1,100 said they were "interested" in turning up.
'Police have been informed with your name'

She said: "My sister's personal address now shared all over social media as an event for a New Year party. Police been informed with your name. In case you are reading this. Looks like you are in for a Merry Christmas."

A Police Scotland spokesman said: "A 33-year-old man has been arrested and charged in connection with communications offences. He has been released on undertaking to appear at court at a later date."

Earlier this week Ms Sturgeon cancelled traditional Hogmanay events and ordered sports matches to be played in "effectively" empty stadia, arguing the spread of the new omicron variant must be suppressed while the booster roll-out is completed.

She also announced that "a requirement for table service" would be introduced at hospitality premises serving alcohol from Dec 27, again for three weeks. Pubs, bars, cafes and restaurants will have to enforce one-metre social distancing.

That's what I get for not being on The Book of Faeces.

I have already expressed my interest in participating in a Hogmanay.

I was all in for the Flaming Balls where ever they were.

I'm sure she is into Flaming Balls too. 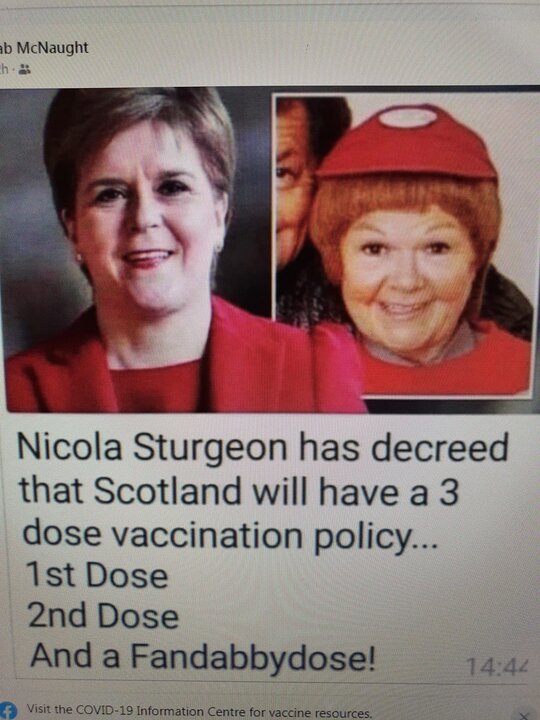 At dinner last night I was asked if I'd heard the latest rumour about our bless-ed FM. I hadn't. Allegedly(as is always the case ) our lady's affections have shifted from Auchterarder, a few miles south on the A9 to Dunblane! Seems unlikely to me but maybe th Undried Plum has some more gen on this given he lives a lot nearer the scene than I do here in the wilds of Morayshire?

Continuing this unpleasant line, I wonder what that nice Mr. Murrell does when he's feeling frisky?

Not our Nicola, surely- as her nest is already occupied.
Top

Rossian wrote: ↑
Thu Jan 06, 2022 9:48 am
At dinner last night I was asked if I'd heard the latest rumour about our bless-ed FM. I hadn't. Allegedly(as is always the case ) our lady's affections have shifted from Auchterarder, a few miles south on the A9 to Dunblane! Seems unlikely to me but maybe Undried Plum has some more gen on this given he lives a lot nearer the scene than I do here in the wilds of Morayshire?


Last I heard, she was sojourning at weekends just outside the Bridge of Allan.

Mebbe she's been scissoring beyond the dotted line.
Top

She just doesn’t want to give up control

https://www.dailymail.co.uk/news/articl ... l#comments
When all else fails, read the instructions.
Top

Wait until Bonking Boris tells you his plan?
Top

Or as Barking should call them, face sporrans.

Good reason to wear a full beard then people could not tell the difference.
Top

Following on from post #1365 by Ilondel, would Wee Krankie's policy have any connection with the Jockistan "case" rate amongst the double-stabbed being more than TWICE that of the dirty filthy pestilence-ridden refuseniks?

Here is the OFFICIAL proof for this who think I'm making this stuff up:-

Enjoy the full blurb but scrolling down to page 30 and perusing Table # 11 will save you losing the desire to live and rapidly show the picture.

But none of the MSM, neither Jockistan nor elsewhere have seen fit to report/comment/question these figures?!

Things still not looking good for the oppressed citizens of Jockistan:-

When will they finally wake up and smell the porridge?

How not to sell an airport

I thought that Esken (or Stobart Air) had set the low bar in the UK for not selling an airport what with the Carlisle Airport fiasco. Seems competence and nous is in short supply all over Britain at the moment, while greed reigns supreme.
Though you remain
Convinced
"To be alive
You must have somewhere
To go
Your destination remains
Elusive."
Top

This one’s a doozy

https://www.dailymail.co.uk/news/articl ... DOORS.html
When all else fails, read the instructions.
Top

There's no end to this woman's stupidity.
Top

It's quintessentially an SNP characteristic.

So they are making the classic mistake of fiddling the mensuration of the problem without tackling the problem itself. It's just like deleting deaths after 28 days beyond first positive test for the virus, or curtailing routine PCR testing and ignoring positive LFL tests in the infection rate figures.

Fiddle the figures to make them look good.

Leaving aside the double entendre of six inches being perfectly adequate, the attitude to window opening in Scottish schools is humourously alluded to by Muriel Spark: