WTF is happening in the UK?

Boac wrote: ↑
Tue May 17, 2022 9:33 pm
Whatever happened to he taxi driver/undertaker that used to do all those video blogs? Is he still selling T-shirts and pillows?

"he" taxi driver is alive and well and his businesses have survived the casedemic, though on a recent journey with him he noted that the expected massive increase in stiffs to be planted or roasted resulting from the 'plague' never materialised...

However, I cannot bear to contemplate your deprivation from his output so here is a suitable link by which you may reconnect with the World news, not just that news pertaining to the disunited kingdom;

So, according to the TV this morning, the pristine and 'totally independent' Sue Gray has had at least one 'private' meeting with the PM during her investigation.

Why do I smell a large rat? Do I expect a Damehood or similar to pop up for her for her exceptional efforts? Do I expect the PM to be but lightly brushed by the report, and to be found honest and true, and not to be expected to understand the rules he spouted at us daily?

Do I dare to have hope of an un-influenced report? Am I a cynic?
Top

Every time Boris or someone working for him opens a mouth, a transparent tissue of lies pours out. It now appears a month ago that Boris asked, sorry, "suggested" to Sue Grey that she abandon her report as with the police inquiry ending 'it was all over'. This was firstly denied but now Grant Shaps said he can't comment on it (admission by omerta) and it's reported in the "Times" as having happened. In the same way as Number Ten claiming Grey asked for a meeting and now admitting it was Boris, but 'just to check the photographs'. Only, it was to ask her not to publish. "What's the point?" Boris is thought to have said, now that the Met Police have been nobbled...
Top

This shower of excrement in Number 10 is going to destroy the Conservative party.
Top

No 10 admitted on Monday that a meeting with Gray before her report had been called at the prime minister’s request, despite ministers saying the opposite in morning interviews.

The Times reported that during the meeting Johnson had questioned whether the report should be published, given most of the information was already in the public domain.

....and......... and.......and......... The country is rapidly becoming dysfunctional. The local MPs that the blue rinses elected appear to have no moral compass. A sad state of affairs. Much as I doubt the ability of the other parties either to run things properly, I do think we need a big reset.
Top

The dysfunction at the Home Office mirrors the ineptitude of the odious Patel and her parliamentary cronies!

https://www.theguardian.com/commentisfr ... rvice-cuts
Though you remain
Convinced
"To be alive
You must have somewhere
To go
Your destination remains
Elusive."
Top

Ideally all of a similar mind on the way the country is going should bombard their MP with a complaint/s. Unfortunately, mine - a BoJo 'mate'/shoe-in/groomed for stardom etc etc - has stopped even acknowledging emails that ask awkward questions about HO policy, the Covid 'policies', Policing, Effluent discharge, BoJo's behaviour in Parliament etc etc, so although I am sure he is getting them, at which point they go into File 13 I know not. It could even be, for all I know, that he has instructed his office to just 'lose' them and not pass them to him.

Until these lapdogs realise the damage they are doing to both the party and the country, we will slide gently down the slope.
Top


Rory Stewart has said the entire Downing Street operation is now focused solely on trying to keep “monstrous ego” Boris Johnson in power, as he warned about the erosion of trust in British politics and compared the current leadership to that of convicted fraudster and former Italian prime minister, Silvio Berlusconi.

The former Conservative cabinet minister joined a chorus of voices criticising the prime minister and his No 10 team after the damning Sue Gray report laid bare the extent of the lockdown-breaking behaviour at the heart of government.

Mr Stewart – who was defeated by Mr Johnson in the 2019 Tory party leadership race – said: "They won't make basic decisions, they won't cut, for example, VAT on fuel, which is crucial to people’s lives. And the reason they can't make decisions is they are fighting, day by day, these headlines.

“The whole of Downing Street is just about one thing, which is the survival of the prime minister. They are sacrificing everything, the country, the party, their careers, to try to keep this monstrous ego floating around in Downing Street.”

Ms Gray's report detailed events at which officials sang karaoke, drank so much they were sick, became involved in altercations and abused security and cleaning staff.

Mr Stewart said that the slow drip of embarrassing stories for the prime minister and his administration had the cumulative effect of eroding trust in politics.

You end up feeling like an aggrieved partner or wife,” he said. “Everytime he is like ‘it’s just one small thing, it’s just one party, it’s one cake, one leaving party, one prorogation of parliament, one lobbying scandal, one wallpaper problem, but they mount up to make our country feels like Berlusconi's Italy."

Mr Stewart is no ally of the prime minister. The former cabinet minister – who was expelled from the Conservative parliamentary party – previously said that Mr Johnson was an “amoral character” and “the most accomplished liar in public life”.

He said in January, when allegations of No 10 parties were swirling, that the prime minister “lies … he’s disorganised … he betrays almost every personal commitment that he has”.

He added: “He was manifestly unsuited to be prime minister from the beginning, so it’s very, very disturbing that a great country like Britain should have chosen somebody so unsuitable for the role.”

BOAC,
I can assure you that MPs ignoring awkward emails is not solely a UK phenomenon.
But you are not going to get someone to understand something when his income depends on his not understanding it.

I would be interested in the current level of attitude to politics in general in the UK.
A recent political poll here showed level of support based on "decided voters". After some delving into the data of the group that did the poll, it turned out that 36% of those surveyed (who historically tend to over-represent those who vote) were not "decided voters". In simple terms, if Coco the Clown were to gather all the undecided voters here, he would win. There is an increasing attitude here of 'a pox on all their houses', if you will forgive the misquote.
Top

I know that well, Fox - I was just 'reporting' my local issues. As I have said, my MP is a BoJo 'shoe-in' to a ?very? safe Tory seat and is now very close to BoJo in the organisation, and will probably soon have a 'ministership' as the facade crumbles, so I hope he falls with BoJo when it happens. The current chances of unseating this man in my constituency are extremely slim.
Top

Johnson is like a Schwarzschild black hole (i.e. not even spinning), sucking the parliamentary detritus in orbit around the huge gravitational attraction of his singular incompetence and ego, across the Westminster party event horizon into the ultimate darkness of his black soul.

In truth, the idiots who vote for these grotesques are the real villains of the piece!
Though you remain
Convinced
"To be alive
You must have somewhere
To go
Your destination remains
Elusive."
Top

True, you are quite correct, which would make him a Kerr black hole!

It fits well with the concept of "frame dragging" too. Who would want to drag a frame like Johnson's around?

In fact the only issue with the Kerr simile is that Kerr back holes don't possess charge, whereas Johnson has been charged, and found guilty! 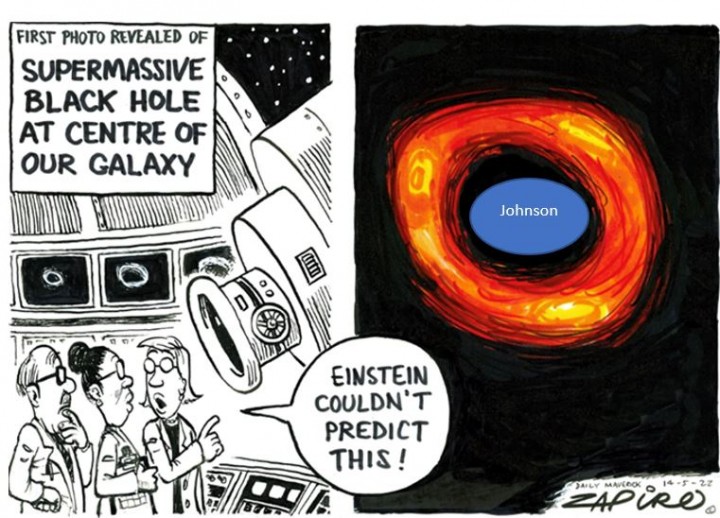 With apologies to Zapiro whose cartoon I altered slightly!

Boris has defined himself:

"Johnson also blocked his independent ethics chief, Christopher Geidt, from gaining the power to launch his own investigations, and rewrote the foreword to the ministerial code, removing all references to honesty, integrity, transparency and accountability."

Boris Johnson has given a reading from the New Testament.

I doubt if our convicted criminal Prime Minister ever does think about such things.
Top

Ah, but even the Devil himself has been known to quote the Scriptures.

Vote of No Confidence tonight. My prediction is that the Grinning Shameless Buffoon will win. If if it's only by one vote, he will hail it as a tremendous victory and that it proves everyone is behind him. Julius Caesar thought the same thing.
Top

What worries me more than BoJo losing is wondering who would take over. Plus the fact that the witless Raab would be running the show for a while.
Top
Post Reply
4430 posts