He has proven his buffoon-ness yet again on UK TV - there definitely is no-one as buffoonish as the Chump, so he should be pleased to yet again be 'the best'. Is it any wonder why no-one can trust the BS that falls from his ....

"I am not going to interfere in the British elections, but Boris would make an excellent PM and that Corbyn a disaster", or words to that effect. No interest in the NHS either, doesn't know where that rumour came from. Very badly briefed for a man in his position, or more likely well-briefed but just ignored the advice from those who know what they are talking about - again.

Now he wants regime change in Hong Kong - that would be Xi, of course. Very sensible.
Top

He seems to have engineered a significant drop in the Dow via a tweet again. All of mates, forewarned, will have made significant profits. And BenT would have us believe the rest are intelligent.

My Goodness. Anyone else tuned into the presentation of the draft impeachment document ? Strong stuff.... Back to my TV.
Top

Nah! Fake news. The chump will have forgotten about this in a few days, like he 'forgot' about meeting Prince Andrew and saying the NHS was 'on the table'. He makes his own fake news.
Top

France is going to leave NATO, just you wait and see. Macron is setting it up. Will be replaced by the Macron and Merkel Euro Army. Except wait ! Merkel's leaving the building.

Trump will then claim NATO is stronger without France, proving now and then he gets it right.
Top

OFSO wrote: ↑
Wed Dec 04, 2019 1:43 pm
France is going to leave NATO, just you wait and see. Macron is setting it up. Will be replaced by the Macron and Merkel Euro Army. Except wait ! Merkel's leaving the building.

Trump will then claim NATO is stronger without France, proving now and then he gets it right.

That is why NATO HQ moved from Paris to Brussels.
Cynicism improves with age
Top

I believe the future of NATO is in flux as we wait for Brexit closure and the structure of the alliance. The post-WWII era, when NATO provided a security umbrella over Western Europe against USSR is no longer needed. Our NATO partners' biggest challenge now is dealing with the disastaster of their immigration policies. That doesn't involve the US and there is no reason as far as I can tell why the US should invest much in NATO. It's nice to have air bases on Euro soil, though.
Top

I can’t believe anyone watches CNN (and MSNBC for that matter) anymore, unless one wants a good laugh watching comedians Don Lemonhead or Rachel Madcow.
Top

We thank the Chump for providing so much entertainment for so many in London. It is even reported in the tabloids here that Prince Charles might have invited him to 'swivel' after being kept waiting for nearly an hour for the ego-boosting process.
Top

Justin Trudeau and Emmanuel Macron have signed a bilateral agreement to only gossip about Trump in French from now on.
Ricardian, Stronsay, Orkney UK
www.stronsaylimpet.co.uk
visitstronsay.com
https://www.wunderground.com/forecast/EGER
Top

And those still at home have decided to proceed with impeachment. We live in interesting times.
Top

Ah well, Donald Tusk is not THAT bad 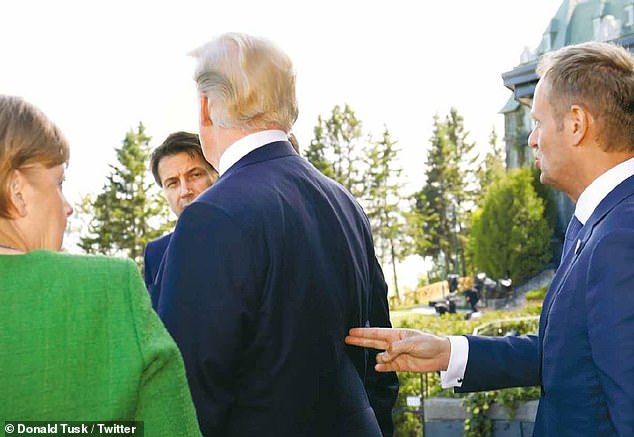 Go on, pull that trigger.
Top

What's Merkel (on the left) saying? "Not here, Donald, too many witnesses !"
Top

I'm pretty sure things will change as November 2020 approaches. But as of today I think the American electorate is turned off by the Democrat impeachment lunge. Impeachment isn't justified by losing an election, and there is little evidence of 'high crimes and misdemeanors' to justify invocation of this process. My view is that the longer Democrats pursue this avenue, the better President Trump and the down stream Republican candidates' prospects will be.

It's a long way to go, though, 11 months to November, and things change. Right now, given the general prosperity in the US, and growing percentages of blacks and Hispanics supporting Republicans, portends well for both the Trump administration and Republican aspects in Congress in the coming election. But we have a long way to go and anything can happen.
Top

I agree with you Ben and a week in politics is a long time let alone 11 months which by comparison is an aeon.

I’m sure Trump is waiting for the right moment to send a Tweet of considerable thud which will cause the idiotic Dems to do exactly what he wants and in so doing cause themselves to look stupid as always.

I think everything is just fluff at the moment. The critical time will be the two months leading up to November next year when the Dems and its media will go full gutter level in a dirty obscene fight.
Top

Trump should be allowed to remain as president. His value as a comedy turn is one bright spot in a increasingly dull world and his removal would imperil the careers of hundreds of satirists and cartoonists.
Top

Mixed views on that, OFSO - whether the 'fun' is worth the risks?

Here is the chump beating his head against the wall at the NATO meeting. I think it was while he congratulated himself on being a prick on an open mic.

A couple of classic dotard quotes in there (for Ben, dotard = "a person whose mental faculties are impaired, specifically, a person whose intellect or understanding is impaired in old age".):

On Syria “we’ve captured the oil and taken the oil”.

Quite Presidential. I can see where you are coming from, OFSO