A great place for a day out and not just for 'boys', there's a huge amount to see, historic civilian and military aircraft, cars, motor bikes, and other aviation and motoring exhibits. On the civilian a/c side, there's Concorde BBDG, a Viscount 806, VC10, BAC 1-11, Viking, Vanguard/Merchantman and more........ all maintained and stewarded by volunteers.

The museum has a programme of events, the next major ones being The Brooklands Double Twelve Motorsport Festival on 18-19 June, and Mach 2 for Tea on Sunday, June 19, 2016

Re-live the atmosphere of the golden age of supersonic flight with Concorde, and the elegant style of afternoon tea in London’s great and grand hotels on a ‘Mach 2 for Tea’ afternoon.

Sip Champagne on Concorde, enjoy Afternoon Tea in the Vickers Suite to the accompaniment of evocative ‘Palm Court’ music, and chat with a British Airways Pilot and Concorde Stewardess about a day in their lives flying ten miles high at twice the speed of sound!

It's just been announced that the Museum, or rather its team of volunteers, has been awarded the Queen’s Award for Voluntary Service 2016

The volunteers of Brooklands Museum have been honoured with the Queen’s Award for Voluntary Service, the highest award a voluntary group can receive in the UK.

Volunteers cover a wide variety of roles vital to the Museum, from stewarding and guiding both adults and school children to restoration of aircraft and vehicles, research, marshalling at events, painting and gardening. Over 800 volunteers are registered at the Museum, coming from every sector of the community and professional background, and priding themselves on their professionalism, knowledge and enthusiasm. Visitors often comment about how much their visits are enhanced by interaction with them.

The Brooklands Museum volunteers are one of 193 charities, social enterprises and voluntary groups to receive the prestigious award this year. The number of awards given to groups this year is slightly higher than last year, showing that the voluntary sector is thriving and full of innovative ideas to tackle community challenges.

The Queen’s Award for Voluntary Service is the highest award given to local volunteer groups across the UK to recognise outstanding work in their communities. The awards were created in 2002 to celebrate the Queen’s Golden Jubilee and winners are announced each year on 2 June – the anniversary of the Queen’s Coronation.

Award winners this year range from a War Memorial Community Trust, providing social facilities for the benefit of the community in Clwyd, Wales, to a club enhancing the community by developing individuals through athletics, in Ayrshire and Arran, Scotland.

The Brooklands Museum volunteers will receive the award from the Lord Lieutenant of Surrey later this summer.

“I warmly congratulate all of the inspirational voluntary groups who have been rewarded for their community work with a Queen’s Award for Voluntary Service. The judging panel for this year’s awards were struck by the quality and breadth of all the successful groups.
The thousands of volunteers who give up spare time to help others in their community and to help solve problems demonstrate the very best of democracy in action.”

“I would like to congratulate all groups who received this year’s Queen’s Award for Voluntary Service, in recognition of their fantastic achievements. The huge amount of work and commitment these organisations put into their local communities is surpassed only by the passion and motivation of the individuals who volunteer. I hope these groups continue to inspire others to get involved and make a positive impact so that we can continue to build a more compassionate society.”

“I am delighted that the vital role played by the volunteers at Brooklands Museum has been recognised by the Queen’s Award. Their unfailing enthusiasm, knowledge and dedication are reflected in both our visitor numbers - increasing year on year – and in the satisfaction shown by those visitors. It is true to say that without their involvement in every aspect of operations, Brooklands Museum could not exist in its present successful form. With our £8million Heritage Lottery-funded Brooklands Aircraft Factory & Race Track Revival Project due for completion in Summer 2017 there will be even more opportunities for the local community to become involved. John Silver, our Volunteers Resources Manager would be pleased to hear from anyone interested in volunteering at the Museum at johnsilver (at) brooklandsmuseum.com or 01932 857381 ext 242.”

I must remember to ask/look out for during Op Downsize for the pic Mum has of her sat on the bonnet of a Brylcreem Boy's fast motor waving a flag doing a circuit at Brooklands. Presumably not the same chap who took her up for a spin at Cranwell after a lunch of liver and onions....
Top

Brooklands Museum received about £4.5m. from National Lottery money a couple of years ago. Somewhat better use than paying it to people walking around balancing poles on their noses or similar crap.

Some of that money has been spent on rebuilding the old Wellington Shed as an aircraft factory, with parts of the display emulating, in a hands on way, the various modules of aircraft building in those days.

Some of the other aircraft have been put into the new Flight Shed, where they are properly displayed, lit, and protected from the elements.

These photos do not really do it justice, you need to go along to enjoy the whole experience. 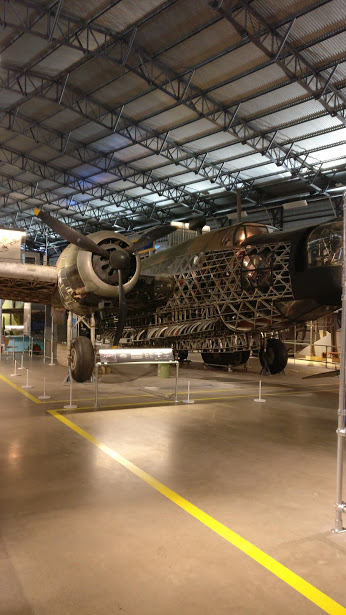 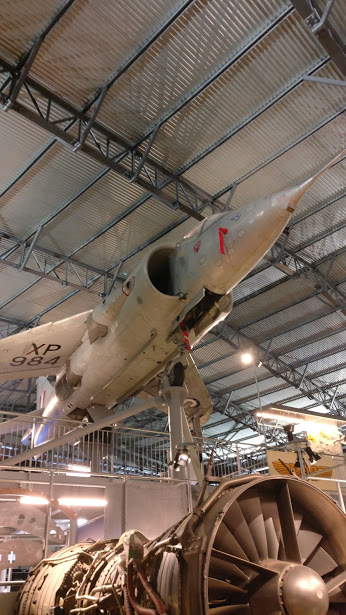 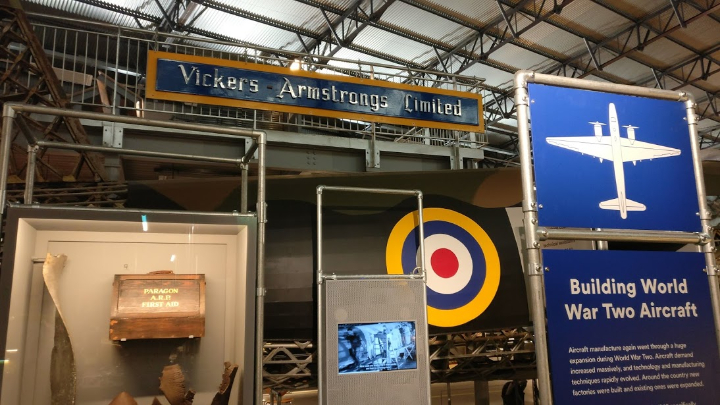 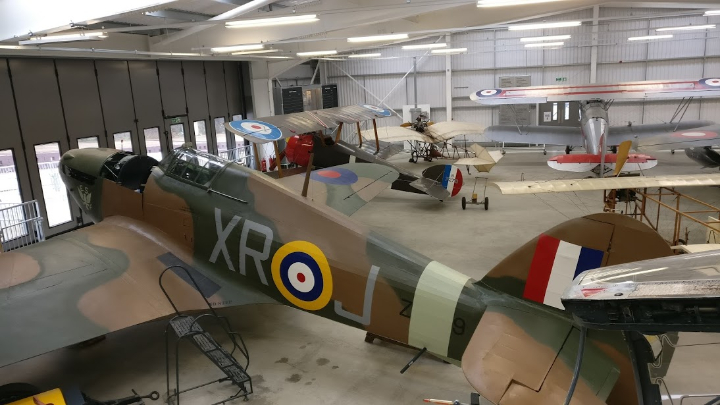 I have only been to Brooklands once before (accompanied by the knowledgeable Capetonian who acts as a volunteer there and I leave him to tell you about all that) but I was amazed to see how some of the outside exhibits were flown in...

Here is one such example...

Max braking and a no brake fires fortunately! Talk about digging a hole. Good piloting and good luck.

We should do it again soon Capetonian!

There's an account of the landing of the Brooklands VC10 G-ASIX/A4O-AB here http://www.vc10.net/Memories/A4OAB_Royalflight.html on 06JUL87.

Somewhere on the net there must be a video of the landing but I have not been able to find it.

I will be back on that side of the globe mid-May.
"Religion is the advertising campaign for something that doesn't exist."
The late Clive James
Top

I will be back on that side of the globe mid-May.


Very interesting article Capetonian. Just as well the VC10 was designed for hot and high as well as short runways!

. An unashamed plug for Brooklands.
On this forum we have a wealth of aviation knowledge, enthusiasm, and experience. Maybe those who live within reach of Weybridge could consider joining as volunteers, members, or even both. Both are rewarding, fun, and useful. 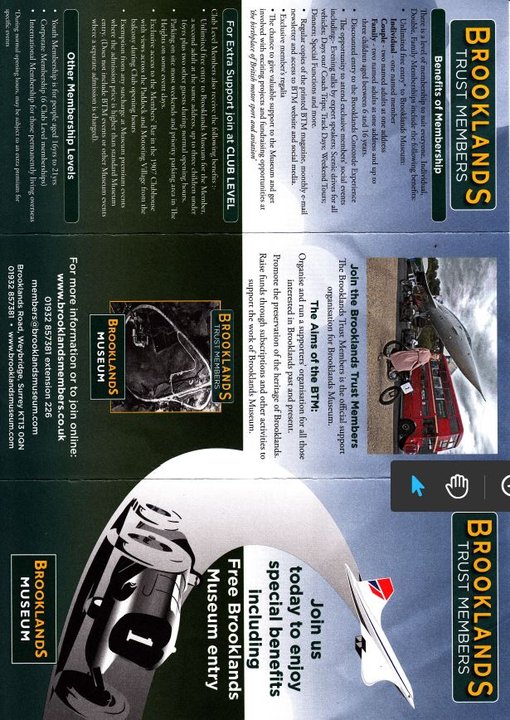 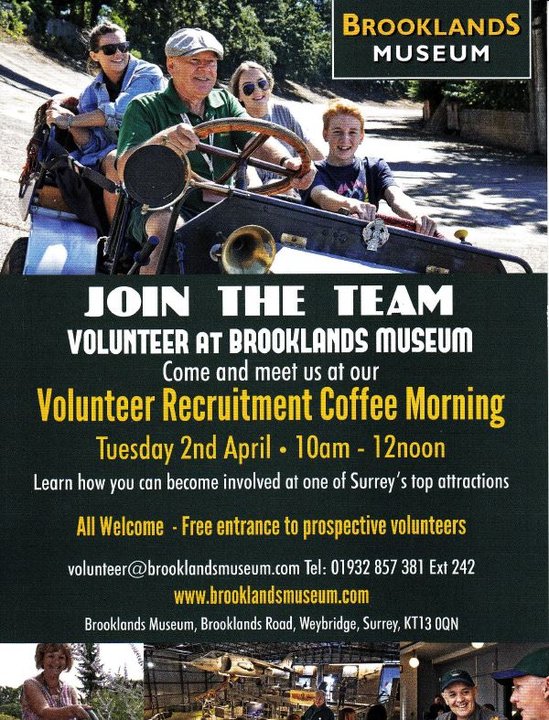 Sorry Cape only just noticed this thread. Very interesting link to Dick King's talk. I am in constant contact with him. Perhaps I should introduce him to this forum.
'Yes, Madam, I am drunk, but in the morning I shall be sober and you will still be ugly.' Sir Winston Churchill.
Top


Our nomination covered every element of what we do - all of which goes into making Brooklands Museum a great place for visitors, but which also gives something back to many people in our community and inspires people to shape their futures through the stories we tell of what people accomplished here. It was great to see all those elements recognised.

Always worth a visit as the exhibitions are not static. Something for everyone, military, historic, and civilian aircraft, classic and racing cars, motorbikes, push bikes, the fascinating Barnes Wallis Strat Chamber, a lovely Club Room and bar for members or their guests.

If anyone is interested in further details or a visit, please PM me.
"Religion is the advertising campaign for something that doesn't exist."
The late Clive James
Top

Visited this summer with JuniorWoody, excellent day out and quite personal as PaWoody had his very first flight in a Wellington and actually flew G-APIM for Cambrian in the 70’s, definitely recommended

Ah, Capetonian, my grandfather used to race the Benz Blitzen at Brooklands. He was the Benz UK Chairman and MD. I have some photos from its crash and the Motor Sport extracts.
Top

I think the posts in the photo are roughly knee high, so the flooding would be about 30-40 cm. 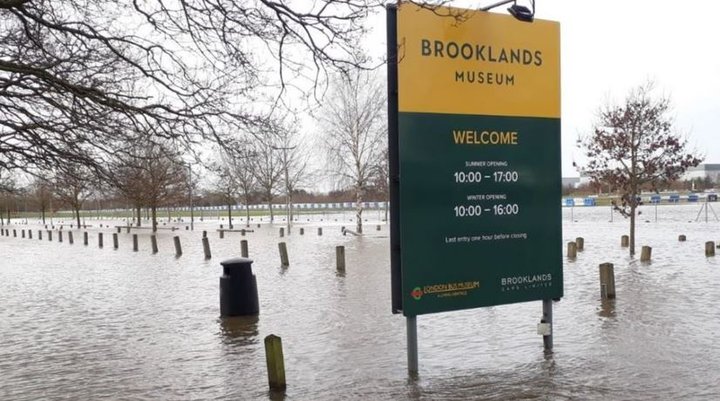 A good instructional film on how a push rod engine operates!

I love the 'pedestrian friendly' brass bullet above the radiator, would get it past 'elf & safety' these days.
Cynicism improves with age
Top

My grandfather raced the Blitzen at Brooklands
Top

Fascinating place Brooklands and the history of some of the characters, vide, the Bentley Boys, that raced there even more fascinating... like your grandfather's was I am sure. 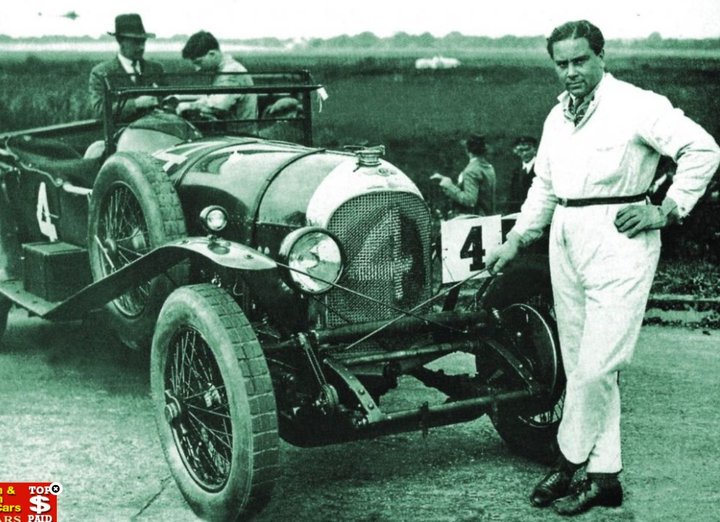 As many of you will know, I am an avid supporter of Brooklands, a Club Level Member, and a volunteer on the aircraft side. My activities at the museum have been an important part, in fact almost the main part, of my social life whilst in the UK.

For obvious reasons the museum has now taken the responsible but sad decision to close to the public for the foreseeable future.

It is a registered UK charity (No.296661) but dependent largely on entrance fees and peripheral activities, which of course have halted. Donations can be gift-aided if you are a UK taxpayer, a benefit to both donor and recipient.

May I ask those who might feel like donating a spare sixpence or so to please visit one of the websites below. Thank you.