Curiously their departure counties are what England means to me, one of my kennels when I visit planet Earth.

Thanks for the track GG, it cheered up my Sunday morning midst all the gloom of virus soup and Brexit whingeing!!!
Top

Latest rumour from the Whitehouse colander is that the Chump is looking at dropping an airburst John Bolton on Tehran in reprisal.
Top

Is the above rhetoric or do you really believe that? Just a sanity check. Nothing personal. If you need help I'll respond personally and do my best to make sure you're OK. Maybe you need a few weeks in Mexico. I can arrange that.
Top

It is what we call a joke over here, Ben.
Top

Did you actually take it seriously, then? No wonder you swallow the Chump crap.
Top

You'd be surprised at what Trump haters emanate. They harbor a quite hateful contingent. I'm happy to know you were joking and not professing something you saw as meaningful.
Top

All politicians regardless of leanings are fair game for satire and other forms of humour, it's just that some make it easier than others. Corbyn was like a fish in a barrel, Boris has done enough daft stuff in the past to be fairly easy pickings too. Trump makes enough gaffes to be in their league as well, being the bestest at all things and amazingly forgetful when he isn't.
Top

The UK has given two fingers to the scare-mongering Chump and is letting Huaweii install part fo the 5G system. It appears also that the plan is to replace the current ECI broadband cabinets with Huaweii. That will all, no doubt, upset the apple-cart. All because the USA cannot produce suitable equipment! Whether it will bring drone strikes on No10 we wait to see.
Top

My Huawei phone can't send any spying info back to China because the entire bandwidth is taken up by spying info being sent to GOOGLE In the USA.
Top

There is no limit to the devious ingenuity of a well paid lawyer!

(CNN)President Donald Trump's impeachment lawyer Alan Dershowitz on Wednesday rolled out a novel and very Trumpian legal argument in his client's defense: The President's personal interest is the national interest when he's up for reelection.

The logic here is that Trump believes his reelection is what's best for the country, so therefore whatever he does to secure a second term is, by definition, in the national interest.

Been in data comm since we formed the bits individually with a Morse key.
Top

OK, relax. This is the joke going around in the US. The Democratic Caucus in Iowa is supposed to be the bell-weather indicator for the selection of the next Democratic presidential candidate in the US elections. The results of the voting in the Caucus have been delayed by, among other reasons, "inconsistancies" which reflects back to Democratic behind the scenes manouvering in the last election to push Clinton forward as the candidate instead of Bernie Sanders who was also popular. Hence the joke that Clinton won even though she is not among the contenders.

Of course Trump is having a field day at the Democrat's expense with his operatives running around saying that if the Democrats cannot organize their own internal convention how can they be allowed to run the country.

.
the dreamers of the day are dangerous men, for they may act on their dreams with open eyes, to make them possible.
Top

Quite agree. An ocean-going disaster.
Top

I thought Nancy Pelosi's tearing up the SOTU speech transcript in front of 30+ million viewers delicious. It demonstrated the contempt the leadership of the Democrat party have for us regular folks who don't generally like decorum trashed at such high levels of authority. She screwed up yet again, after screwing up the House impeachment process.

As for now, President Trump is sailing on calm and friendly seas. The economy is great, his approval polls are quite positive, Democrats are in disarray, and even potentially black swan world events are managed by the relationships President Trump has developed with his counterparts globally. When you get an executive and strategist like President Trump into the Oval Office, hang on to him as long as you can. Bows also to President Reagan in that regard.
Top

Purleeeeaaaasssse Ben, it was not Perlosi who pressed for a 'trial' without evidence or witnesses!

We would all be laughing our socks off if the matter were not so serious!
Been in data comm since we formed the bits individually with a Morse key.
Top

I have a different interpretation of Pelosi's action to Ben. It was straight out of Trump's playbook - do or say something that attracts attention away from something else. It clearly worked, everyone's talking about tearing up the speech, not what was in it. I think she won that one quite convincingly by playing Trump at his own game. It may cost her later, or it might get forgotten as the next thing hits the news cycle.
Top

What Pelosi's spectacle was was a petulant and insulting tantrum directed at the president, mid-speech during the single time the president addresses the nation and its Congress every year, one of our biggest events, watched by a lot of us. And seated behind the president as he gave his address, she was assured of being in view of everyone watching.

As you know, I approve of President Trump and his performance. But I would have been appalled at such a juvenile stunt if the speaking president were one I opposed and my own party speaker pulled the same stunt. It was crass, unworthy of the setting, and utterly reprehensible. When you sit in the chair as Speaker of the House at the SOTU address, you are an upholder of our democracy and republic, even though you are in opposition. Antics like Pelosi's are totally out of place in that setting.

The upside is I don't think it will wash well with the majority of American voters. I've come to welcome the hatred, vindictiveness, name-calling, and anger of Trump opponents. Real people are seeing the reality of how well the US is doing these days, and the spitting and shouting on the other side is losing its effect.

The US is broken, openly 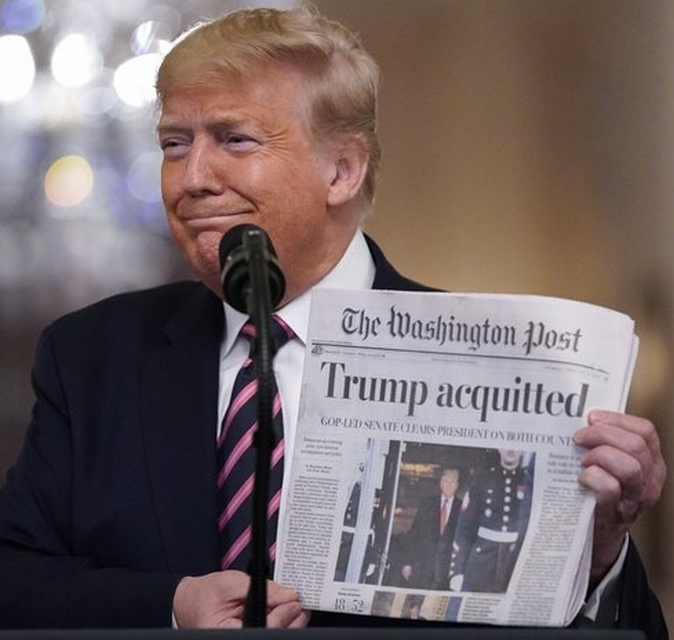 Nixon must be clacking his bones in his grave.
Top

There are reports that Chump was incandescent and apoplectic during a ‘phone call with Johnson over the Huawei decision.

Has anyone any proposals as to what colour his complexion would have turned during this phase?

Re: The US is broken, openly

Nixon must be clacking his bones in his grave.