Fascinating stuff C16. His site is very interesting too.

http://www.marcwolff.net/index.html
“I love deadlines. I love the whooshing noise they make as they go by.” - Douglas Adams
Top

John Crewdson worked on that one. He turned down the job of flying through the building, but agreed to do the camera ship flying. He thought that the recirculation effects would be too unpredictable, but Marc recognised that so long as he remained in translational lift he'd be OK

Gill, John's wife, did some of the stuntwork on that film too. They had met on the location of Where Eagles Dare. She was the body double for Mary Ure and he did the aerial work for the film, including the rather implausible German Bell 47 in the Schloss courtyard. He was just glad that the film producers never wondered why the type has that number of 47 in its name.

John Crewdson plays a leading role in Martin Caidin's very good 'Everything But The Flak' that covers the exploits John Crewdson and a group of reprobates led by an Australian called Greg Bond, who procured three authentic B-17 bombers for the filming of John Hersey's The War Lover in the USA and who then flew them over from the USA to Britain.

He flew this stunt for the abovementioned film.

Didn't Crewdson come unstuck when the Jesus nut let go on the Alouette he was flying while undertaking some coastal survey work or other (seal count)?
“I love deadlines. I love the whooshing noise they make as they go by.” - Douglas Adams
Top

https://www.thelocationguide.com/2011/0 ... arc-wolff/
“I love deadlines. I love the whooshing noise they make as they go by.” - Douglas Adams
Top

Yes, John was killed in the 'AP crackup.

He had flown a lot more hours on that airframe/engine than showed in the logs. The maintenance really wasn't up to scratch and the wrong grade of grease had been used on the threads of the Jesus nut. The AAIB Report hints but does not overtly excoriate him that he was a Director of both Helicopter Hire and the sister company Helicopter Maintenance. Our CAA AOC Inspector was Keith Sissons, an old mate. He got into a spot of bovver at Kingsway House over that situation.

John'd been in a few crashes before. One in Gib harbour wrecked his spleen, which did him no favours as he enjoyed a dram.

Gill is still around. She instructs/mentors stunt men and women despite having retired gracefully years ago.
Top

I only met John Crewdson once and that was in 1973 at the very first Offshore Oil Exhibition in Aberdeen. We took an Irish Helicopters Bell 212 EI-AWK from Cork and parked it on a small raised grass area on the corner of Bedford Road and St Machar Drive in Aberdeen University grounds where the exhibition was staged.

John wasn't best pleased as he had a couple of Bell 47s there equipped with spray gear for oil dispersion - they were tucked in behind us out of sight in the photo. He thought he had the sole rights to that piece of real estate for the duration of the exhibition!

EI-AWK was formerly G-BALZ before we took over to Ireland. Golf Balls subsequently had a long and distinguised career worldwide with Bristow and since about 2009 I think it has been with another operator in Canada. 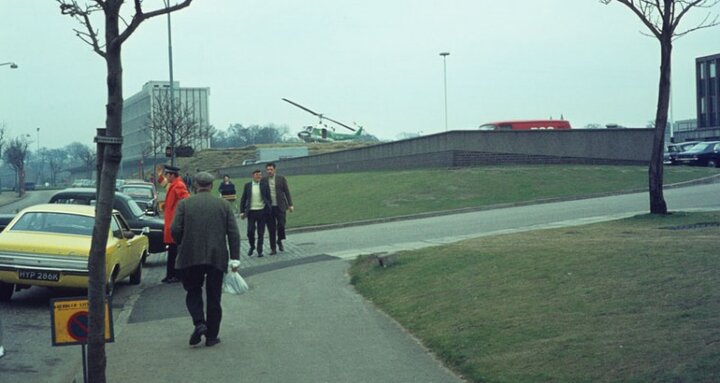 The mention of Polish wartime pilots in the 'BOAC in the old days' thread prompted me to recall a couple of my wartime Polish pilot acquaintances who ended up flying helicopters. Firstly there was Pete Peckowski - or to give him his proper name - Jozef Wojciech Peckowski. 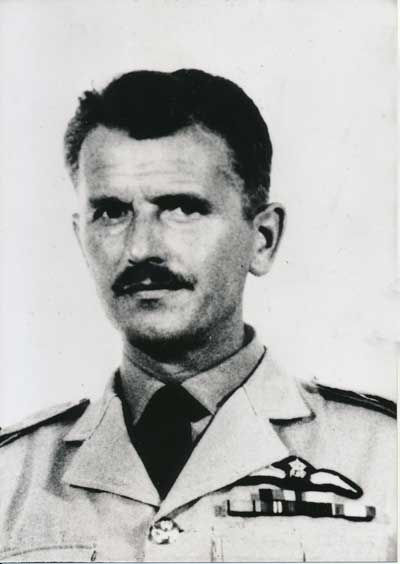 He was born on 3rd July 1918 and became a pilot; he trained as part of the frustrated XIV Promotion and should have qualified in the summer of 1939. However, his training was disrupted by the German invasion of Poland on 1st September 1939 and he was part of the class who were evacuated to Romania and thence to France. His route is not certain but he is believed to have taken a ship to Malta and then on to Marseilles, in France, where he was assigned to the Lyon-Bron air base.

He did not stay in France until the capitulation, but transferred to England, where the need for airmen was greater, in February 1940. Unfortunately, during his escape from Poland, he contracted a serious dose of malaria and was hospitalised for 11 months before completing his initial training and learning the English language, as well as familiarising himself with the controls of British aircraft.

After this, he was transferred to RAF Evanton in Ross & Cromarty (now Rosshire) in the north west of Scotland. At the time, this was the home of No 8 Air Gunnery School, and his task was to pilot “tugs” to tow targets over the Cromarty Firth to train air gunners. Towards the end of the war, he transferred to 304 Squadron, with whom he flew at least ten anti-submarine missions between October 1944 and May 1945.

From 12th November 1945, he was seconded to 16 Ferry Unit at RAF Dunkeswell near Honiton in East Devon, from where he flew a multitude of aircraft to wherever they were needed.

After the war, he chose to stay in the Royal Air Force and was appointed Temporary Flight Lieutenant on 1st September 1948 with seniority dating back to 1st April 1947. This was made permanent on 8th October 1948. He was given the new RAF service number of 500065 which he retained until his retirement on 1st July 1962 – all of these moves were reported in the London Gazette.

His post war activities seemed to lean towards his career flying helicopters and this developed during time spent in Southern Rhodesia helping to create their new independent Air Force, but more so during the Malayan Emergency where he spent much of his time moving men and supplies through the jungle and winning hearts and minds among the Malay people. He was Gazetted again on 16th June 1959 when he was awarded the Distinguished Flying Cross. The citation was “In recognition of gallant and distinguished service in Malaya.”

But it was not only the Royal Air Force who gave him recognition: after a tricky rescue in the jungle, a Malay tribesman gave him a 2 metre long blowpipe and darts as a means of saying thank you. When he returned to Britain, he had to cut off the tips from the darts as they were still coated with curare – a lethal, blood clotting poison!

After his retirement, he took up a position with the Oxford Flying School where he was responsible for training Police helicopter pilots and he excelled even in this field, winning the Pike Trophy in 1966. This is an award made by the Guild of Air Pilots and Navigators to a pilot who has made an outstanding contribution to the maintenance of high standards of civil flying and safety, taking into account working conditions and opportunities.

Pete also flew for British Executive Air Services at Oxford Kidlington and I first met him when he came over to their subsidiary, Irish Helicopters, to give me my Bolkow 105 conversion. We did that at Shannon. Pete was a chain smoker and even when he chopped an engine on me he continued to smoke whilst I carried out 'run on' single engine landings on skids. I remember when he and I did a trip to a survey ship at maximum range west of Shannon. I'm surprised we found it as the cockpit was a thick blue IMC haze of cigarrette smoke throughout the outbound leg. At least he refrained on the inbound leg with passengers.

Jozef, known in Britain as Juszek or Pete, died in Oxford on 27th March 2001, aged 83 and was buried at Witney.

I never knew the proper Polish name of the other pilot. He was known to one and all as Ted Nowak. I know nothing of his background except for the tale that he flew one of the Lancasters for 'The Dambusters' film - I don't know whether that is true or not. Ted lost his pilot's licence on medical grounds in 1973 when he was personal pilot to a property millionaire. I took over his job but he was kept on as Aviation Manager - we also had a Citation and a Navajo. Ted was very enthusiastic and excitable. One day I was asked to do a demonstration on behalf of MBB to one of their potential Bo105 purchasers at Sherburn-in-Elmet. Ted insisted on coming along on the demonstration. He thought what I did was tame and he seized the dual controls, pulled up into a nose high vertical climb and pushed hard through negative g at the top into a nose down vertical descent. We had a bit of an argument after that!

The property business went bust a year later and we all were made redundant. I last saw Ted at Aberdeen Airport in the late 80's - he had been working offshore as a flight statistician for Shell offshore in the East Shetland Basin.

In the 60's and early 70's Ted and Pete flew as film pilots using an Alouette 2. They did the flying for the BBC TV series called "Bird's Eye View" around Britain and Ireland from 1969-71. This was long before the days of gyro stabilised cameras hidden in a small ball at the front of the helicopter. Pete was the pilot in this episode:

In those days and for some time afterwards the cameraman was perched on the side of the helicopter wearing a monkey harness with the camera steadied by a Tyler mount or sometimes by bungee cords! Here's a modern version of the Tyler Mount: 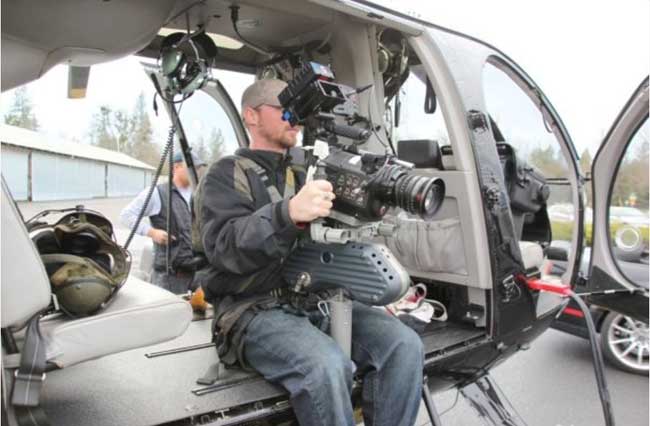 Often the cameraman was a good friend of mine, the late Peter Allwork. In 1970 Pete and Peter did the filming for "The Red Baron" film about Von Richthofen and in the photo below in an Alouette 2, Pete is far left, behind the cameraman's wind blast protector screen, smoking as usual, and Peter Allwork is next to him in the white hat. 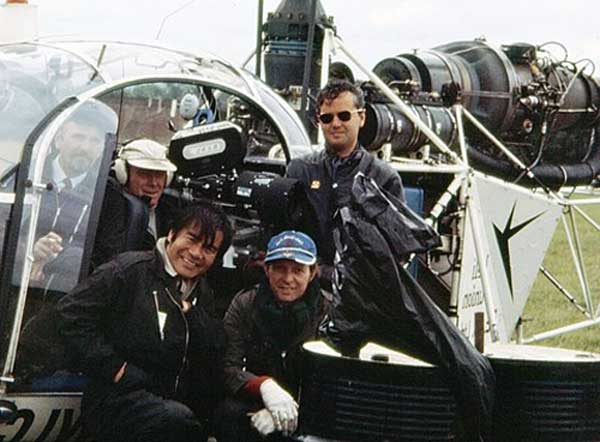 Wouldn't you know it, serendipity or coincidence or something like that, my August copy of Pilot Magazine dropped through the letter box this morning and lo and behold, on Page 40, there is a wonderful big colour spread and article on Marc Woolfe, not heard of by me until C16 mentioned him...

Well worth a read if you fork out the £4.50 for the magazine or you can read part (or all) of it here for nothing...

https://www.magzter.com/article/Flying- ... MOVIE-STAR
“I love deadlines. I love the whooshing noise they make as they go by.” - Douglas Adams
Top

As for BOAC nostalgia, more motor racing than flying but, or rather, motor racing sponsored by BOAC back in 1970 I watched the 1970 BOAC 1000 kilometres again care of Amazon Prime this weekend. A truly classic race... 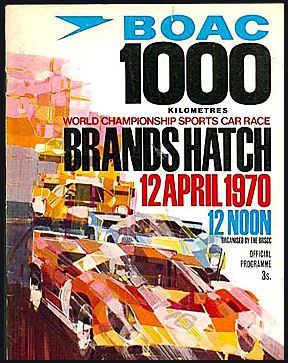 Motorsport Magazine on the race

I could go on about the BOAC Sunshine Series in South Africa which gave Jody Sheckter his chance to shine and go on to win the F1 world championship but I won't drift the thread as much as he used to drift his Merlin formula ford around Kyalami back in the day.

https://www.uniquecarsandparts.com.au/r ... _scheckter
“I love deadlines. I love the whooshing noise they make as they go by.” - Douglas Adams
Top

Brilliant article - enjoyed reading that!
The helicopter pilots' mantra: If it hasn't gone wrong then it's just about to...
https://www.glenbervie-weather.org
Top